Dying Light and Damsels in Distress

This is what one of the writers of Dying Light said about the three major women in the game:

If we’ve done our jobs right, we have given these women believable, realistic lives.

That is a noble goal. But, in my opinion, not achieved. It happens. But it’s quite interesting to analyze why.

In its first half, one of the things that Dying Light unsuccessfully tries to copy from other games are quirky NPCs. We have seen madmen in Far Cry and schizophrenic grave robbers in Red Dead Redemption, and now we have a creepy Gazi who talks to his dead mother, and a Gas Mask Man who keeps fresh air in a bag. These characters, forced and with all too obvious geneses, are more embarrassing than interesting. 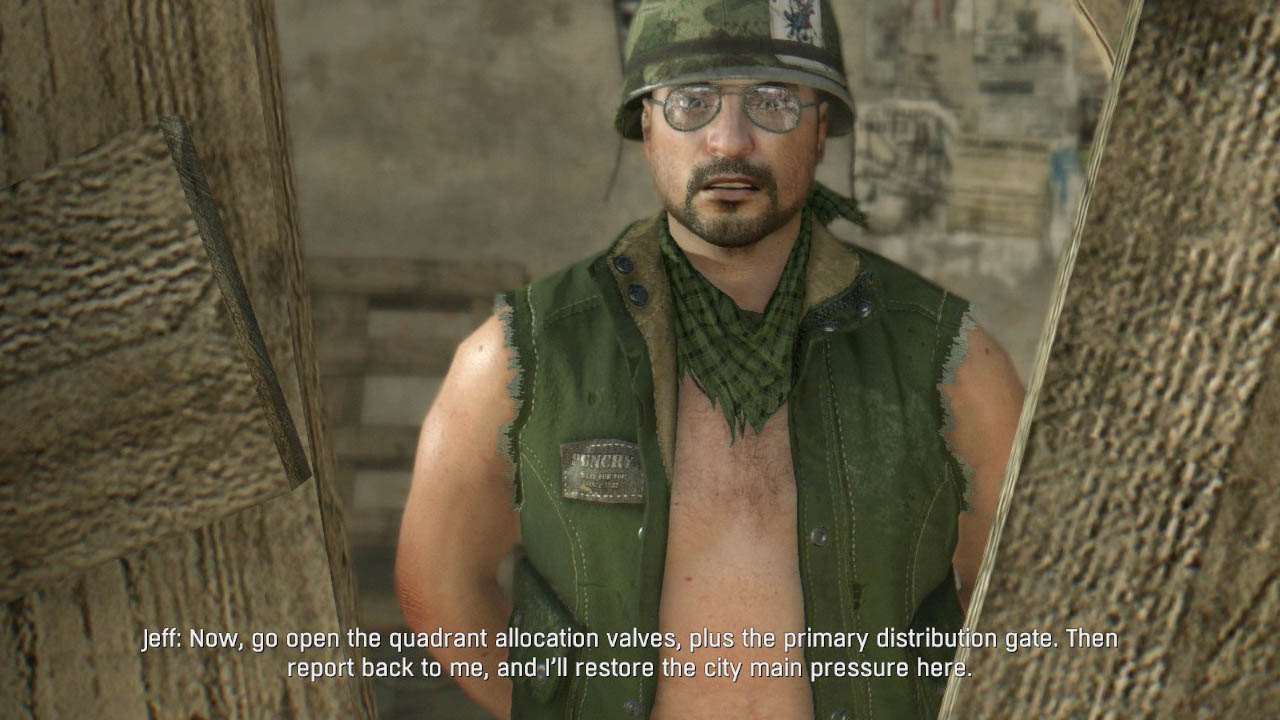 However, in the second half of the game, Dying Light finds its own voice and starts telling engaging, even if simple stories of real human drama. I don’t want to spoil the surprises and twists of the side quests involving a certain boy’s brother or the voice in the cellar, but let’s just say that they were the major reason behind the skyrocketing of my own personal score of the game. 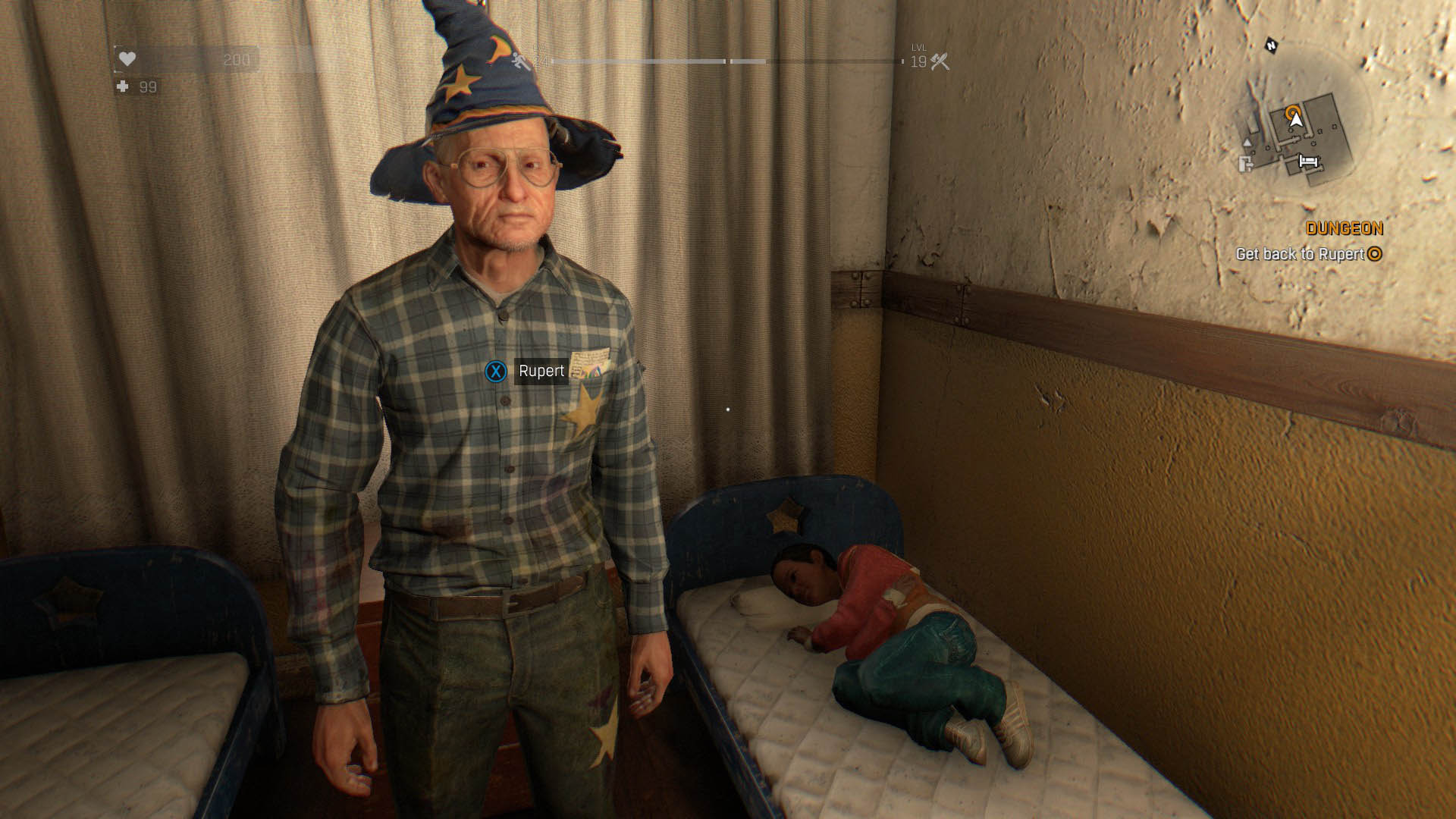 Dying Light works best, then, when it’s a grim story of survival, and thus it’s no surprise that “believable, realistic” characters would only enhance the immersion. We have seen such approach in Telltale’s similarly themed The Walking Dead, where every NPC character is three-dimensional, even the most innocent ones: 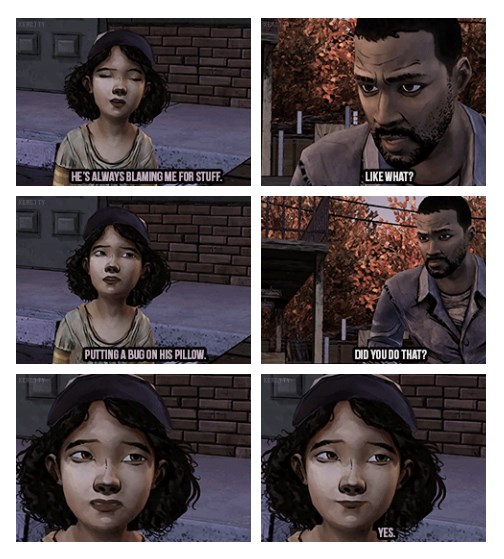 However, the failure to achieve that goal all begins with this quote:

[…] this issue of positive representation and portrayal of female characters is something near and dear to my heart.

I do believe in the honesty of the writer’s intention. But with an ideological goal like that, when it’s not about being human and it’s about a calculated social statement, it’s very easy to lose the ship to the cardboard shallows.

Which is exactly what happened. I could not say if it was the outside pressure to create “strong female characters” or simply the writer’s own choice, but the end result is women of Dying Light as paper-thin angels, saviors and leaders. And that lack of depth is what makes them weak.

Meet the main woman NPC in the game, Jade Aldemir.

How does she enter the story? She saves the hero’s life at the beginning of the game. How does she react to the fact that saving the hero cost her friend’s life? She suffers in silence but lets our hero know she does not blame him.

Is she brave? Yes, much braver than the hero. Is she smart? Yes. She’s behind all reasonable and right decisions against the hot-headed leader of the survivors. Is she independent? Yes. I cannot count the amount of times the characters say “Jade takes no shit from anyone”.

Is she a great fighter? She is a “renowned kickboxing champion nicknamed The Scorpion”. What does she care about the most? Other people. Does she save the hero again later in the game? Yes.

I could go on like this for a while, so let’s skip to this question… Does she have a single flaw?

Note how Techland did try to make her a tiny bit more human: 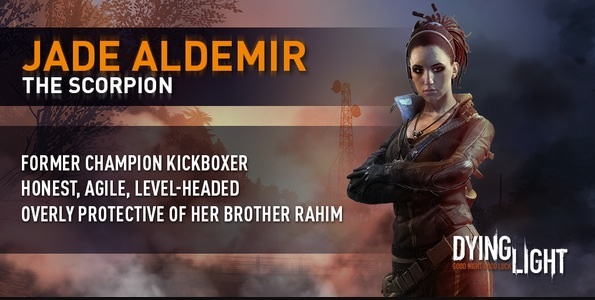 Except of course it turns out not be a flaw, as her brother Rahim is, in fact, one highly irresponsible man who… Okay, I won’t spoil it, but let’s just say that chaining him to a radiator and feeding him sleeping pills only would not be unreasonable. Jade is, simply, one hundred percent right about him.

Jade is, simply, as one hundred percent cardboard as they come.

Sometimes, I don’t mind cardboard. I have nothing against, say, a male holodeck sword and sorcery fantasy in which the hero is a Conan-like warrior in a world full of beautiful women, evil sorcerers and simple solutions that usually involve a fist. Just like I have nothing against Adults Only rated romance novels that dominate the book market. It’s all fine, we all have the right to fantasize.

But when the goal was to create women with “believable, realistic lives”, well, it’s not really what Dying Light offers.

Unsurprisingly enough, some of those that Techland aimed to please were disappointed anyway: 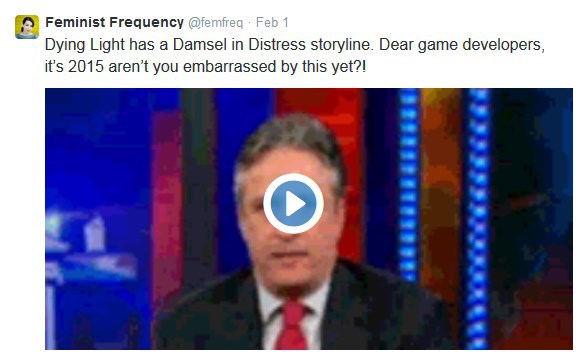 Let’s talk about this for a second, as tropes are important when creating characters, and so is the pressure from the outside world.

First, there is nothing wrong with Damsel in Distress trope as such unless you really hate Raiders of the Lost Ark or Star Wars. The only problem with this and any other trope is that it might be overused to the point when it’s boring by being predictable, and predictability is the mortal enemy of good story-telling. We don’t know, however, how prevalent that trope is in modern video games – we had many critics of the trope, but no one showed how many percent of available games that make a story an important part of the experience use the trope in pure form. And I mention “pure form”, because a good writer knows how to mutate or subvert the trope to make even the most tired one interesting. Joss Whedon does the trope in basically everything he does, but he usually finds a way to keep things unpredictable or at least full of tension.

Second, there is no Damsel in Distress storyline in Dying Light. There is a one-two hour long segment – of the much larger storyline – that involves the kidnapping of a woman. In the context of the brutal post-apocalyptic world of survival horror it’s nothing out of place, and many more men, including the hero (twice), are kidnapped by evil men – but yes, a woman is also kidnapped. However, the kidnapping of a woman is not automatically the Damsel in Distress trope.

Third, the segment does not feature the Damsel in Distress trope, but a different trope called Badass in Distress. It’s the writers’ smart move, as mentioned in TV Tropes: “In other words, Tropes Are Tools, and this is a good one for adding depth and humanity to a potential Boring Invincible Hero” – which, as I mentioned before, the perfect kickboxing champion Jade exactly is.

Fourth, the Badass in Distress segment ends with the mix of two other tropes which I will not name due to spoilers, but you can find them here and here. Worth mentioning, though, is that ultimately Jade is not saved by the hero, but saves the hero instead, and while doing so she actually makes an important choice for him, effectively disempowering him – which is the exact opposite of being a Damsel in Distress.

As you can see, Techland created women characters that are so spotless they’re bordering on caricatures, and yet they have been punished for it. I guess it comes with the territory. Movies, games, books will always be criticized from various practical and ideological angles, and that critique will sometimes be unjust.

But this is exactly why creators should never try to appeal to an ideological checklist, no matter where that ideology comes from. We will never please everybody, so why not stop creating characters that “strong” and “positively represented”, and create true human beings instead?

We should not fear the tropes. They are here because that’s what’s left after thousands of years of story-telling, that’s what fought and survived, that’s what resonates with people.

There is no problem with characters created to represent an idea, a message. Not every single one has to be, just like not every song is a call to action – but if they are, their message will only be heard and respected when it’s conveyed through real human beings, and not cardboard cutouts.