It is not what you think. On the surface, Bioshock Infinite is an artistic and, it seems, a commercial success. It has a Metacritic score of 95%, and sold well over a million copies in the first week.

But this is not where the story ends.

I’ve played the game and felt the urge to write about its issues even when I was just five minutes in. Then I’ve played it to the end. The breathtaking finale helped a bit, but the game suffered from so many issues that the ending wasn’t able to wash away the bitter taste in my mouth. Let’s just say that instead of feeling like writing another blog post, I felt like writing a book.

But that’s the key here. I’ll get back to that.

I went to the Internets and read the discussions. The universal praise for the game’s visuals. The posts about Elizabeth being the best sidekick in the history of games. The standing ovation for the quality and depth of the story.

I felt like a protagonist of a Kafka’s novel. Are you familiar with the annoying “I can’t be the only one who…” that opens up a lot of online discussions? I did not need to ask myself this question. It simply felt like I was, indeed, the only one.

But when I dug a bit deeper, it turned out that no, I was not the only one. It was a silly assumption anyway, as there’s always someone on the Internet who agrees with you. Anyone who discusses anything can always find a link that supports their point of view.

But it wasn’t a question of finding some obscure, random nerd rage posts. Critical articles and posts were popping up in all kinds of high profile places: from NeoGAF through Kotaku to to Gamasutra. Hell, it was not longer just about the gaming scene: even the infamous Hulk Critic stepped in.

It was no longer a child crying out, “But the emperor isn’t wearing anything at all!”. It was a crowd.

Thomas Grip, the lead designer behind Amnesia performed an autopsy. Brainy Gamer has realized it’s the end of an era. Daniel Goldin disagreed with the message. There are three paragraph reviews, heck, even one paragraph ones that expose the core problems with the game. There’s even a short Interactive Fiction game that can teach us more game design than many books. And no, Elizabeth is not the best sidekick ever.

So… What’s the point of this here post? To prove that Bioshock Infinite is not a good game?

A side note. We have no idea if Bioshock Infinite is indeed the game that Ken Levine and the gang wanted to make, or if it’s the result of a compromise between the dream and the harsh reality of the market and deadlines. Of course, nearly every game in existence is such a compromise, but it’s also a matter of proportions.

Never mind, though. We got what we got for our sixty dollars.

But if you think this is about hating on Infinite here, then you could not be more wrong. There is not a single piece of art that everyone likes. Some people find “Mona Lisa” boring, Picasso is “pretentious”, and “Django Unchained” is the worst movie ever.

When you play Bioshock Infinite, it can be the experience of your lifetime. I don’t know that. Even though I dislike Metacritic, the game’s score is not an accident. If you played the game and loved it, great. If you haven’t played it yet, buy it.

The question of whether Infinite is good or bad is not the point.

The point is that Infinite has ignited a discussion on game design like no other game before. Bad games are unable to do that. Bad games are bad games, and we lash out at them and forget about them the next day.

The only way a game is able to ignite a deep, long lasting discussion is either when it’s a milestone in gaming, or when it’s like a passive aggressive alcoholic: a loving father and husband by day, and a monster by night. Just like Infinite.

Each time Infinite melts our hearts, it follows up with a big slap. I could write about it all day long, or I can quote this tweet:

“Bioshock Infinite: an exploration of racism, religion & American exceptionalism told through the eyes of a man who eats garbage sandwiches” – Kumail Nanjiani

So yeah, it’s not the best game ever. But Infinite has revolutionized games. We do not see it yet, but it did.

AAA world appreciates Journey, but no one is thinking how to use its lessons in their own game, really. “It’s a cute little downloadable title that commercially did okay, at best”. No one is making their own The Walking Dead. “They’re just successful because of the license”. No one is redesigning their game based on their experience with To the Moon. “Honestly, I have not played it, the RPG Maker graphics are too much”.

Not yet. All these games were not enough.

The resistance is strong. I talked to quite a few AAA developers about Infinite, and I’ve heard all kinds of insults and laughs. “Hipster designer”, “armchair critic”, “out of touch with reality”. At best, their defense of the game was based on statements like “but other games do this too”. 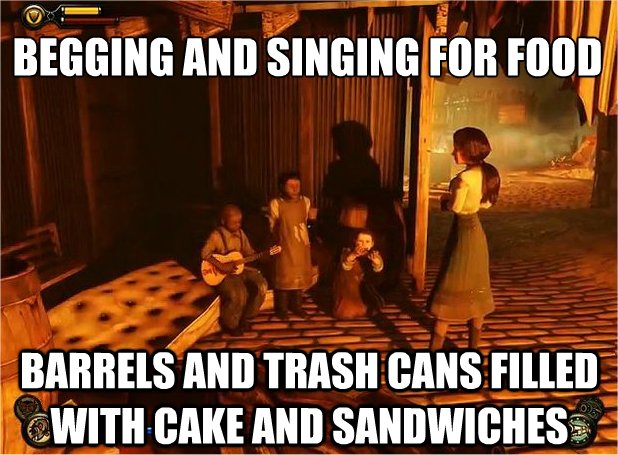 Marie Antoinette never actually said that, but the anecdote describes the situation well. On the eve of the French Revolution, the French queen uttered upon hearing peasants’ complaints that there wasn’t enough bread to go around: “Let them eat cake.”

The studios are being closed left and right, the games are not selling, but no, it’s not because of our designs. It’s the mobile, it’s the crisis, it’s the end of the console cycle. And Bioshock Infinite is the bestest game ever.

But… Not all designers agree. Not all journalists. Not all gamers.

Two weeks after I have finished the game, I am still thinking about the game and how it affects the future. A lot of us are. I’m not sure if we – the gaming world – ever had this kind of discussion before. Of course, we did talk about games, but there was this separation of gamers and journalists, designers and critics.

Not anymore. This time it all feels different. The crowd demands more from the emperor.

This is a good thing.

There’s just something in the air, isn’t there? A change. It’s like that first day of Spring: still cold and grey, but the air smells different.

I wrote a pretentious little post half a year ago, when I was hit in the face with this side of gaming I always kind of ignored. But it was all about indie gaming. This time, it’s bigger than this. Bioshock is an AAA juggernaut, and thus even more influential.

There will be a day when an AAA title appears and does not suffer from gamisms implemented without understanding how they poison other elements of the experience, or without the ludonarrative dissonance plugged in just because game making is harder without it.

And it will owe a bit to Bioshock Infinite. Because this game gave us a taste of heaven, and now there is no turning back.