Game Openings are Important, or the First 300 Seconds of Bioshock Infinite

Bioshock Infinite just got unlocked on Steam, so I dropped everything and started playing it. After five minutes, I had to quit because the urge to write this post was stronger than the will to continue the adventure.

There’s this great talk from Dead Space’s art director Ian Milham about – among other things – the magic of a game opening. He talks about how we formulate our opinion on a game in the first five or ten minutes, and how later on we tend to ignore the stuff that does not support our opinion, and exaggerate the importance of the stuff that supports it.

The funniest bit was about the time when Ian asked the artists to add a few “perfectly round” objects on the table in the intro cinematic, just to trick the players into thinking that a game with such high visual quality assets must be the hottest thing ever. It worked.

Bioshock Infinite is also extremely important. It’s been one of the most anticipated games ever, its Metacritic score is 110%, and it’s a game we’re all going to be talking about for years.

Here’s the first five minutes of the game. Don’t worry, no big spoilers, really, nothing will surprise you here:

Look, I don’t want to beat around the bush, so let me just say it and get it out of the way: Bioshock Infinite does a lot of things in the opening I do not agree with. And I want to analyze it all and discover the reasons. But if you are looking for a drama, please look elsewhere. Even though I am using Bioshock Infinite as an example, this post is not really about this particular game. It’s about a lot of games, including every single one I’ve done so far.

I am not a big fan of confusing openings in anything: games, movies, books. A famous writer – was it Lem? King? – once said that if you don’t understand what’s going on on the first page, then it’s not worth reading the second one. That is not always true, but most of the time I tend to agree with this statement.

Bioshock Infinite’s opening is confusing. I cannot spoil it for you, because I have no idea what was going on. There was this guy, weird things in the lighthouse, and then I was in Columbia.

However, the dislike for confusing openings is obviously a highly subjective thing. I am sure that there are people out there who love this kind of a puzzle, and it is quite possible – or rather: certain – that I will figure this thing out myself sooner or later, and that I will then understand why the opening couldn’t have been any different.

So let’s not hold it against the game, and let’s move on to the first moment when I started to lose the immersion and the sense of presence.

In the opening scene, these two characters are talking to each other and, as you can see, the guy is not happy with the fact that the woman is not rowing with him.

But how could she? There’s only one pair of oars. 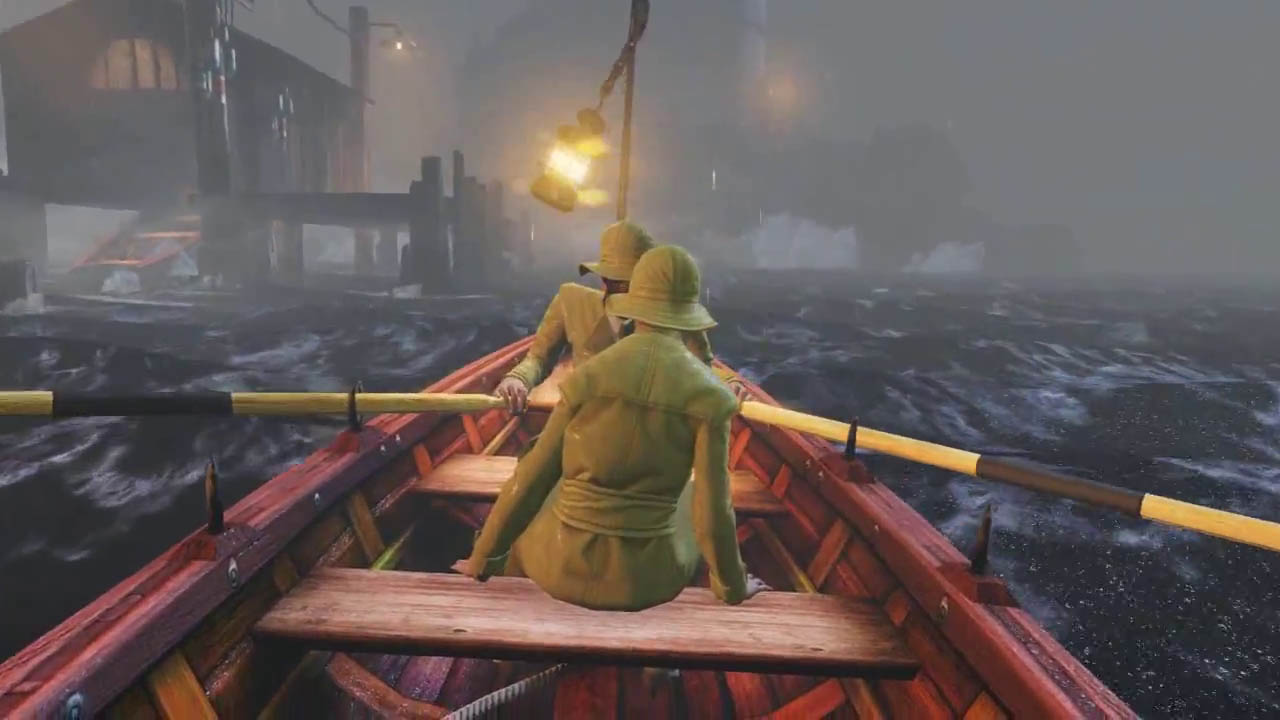 “I’m sure I am not seeing something. Or maybe he wanted her to take over.” – I mutter to myself, and continue with the game.

The boat arrives at the destination. There is a first-person animation of me leaving the boat and getting on the pier. It ends with me looking at the top of the nearby lighthouse for no reason whatsoever. 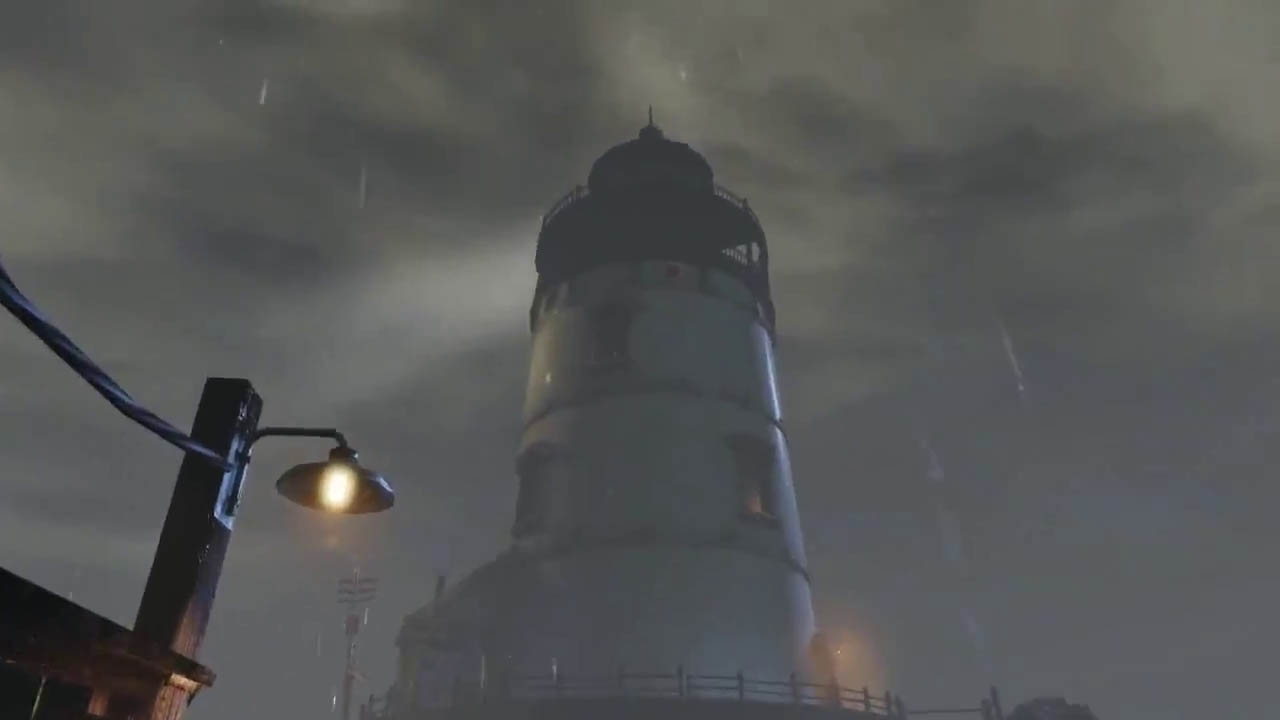 “Oh, it’s one of those games…” – I think. The thing is, I start to feel a little suffocated. I wasn’t given a chance to discover the lighthouse on my own. The designers felt like they had to show it to me, even at the cost of an awkward and unnatural ending to the “getting on the pier” animation.

But hey, maybe that’s just me. I have done the same trick so many times in my games that I basically notice it every single time when someone else does it. “Maybe players don’t see things in the same way, and maybe they love the fact that someone grabbed their head and twisted it towards the Important Part of the Environment”.

There is nothing too attractive on the pier except for this: 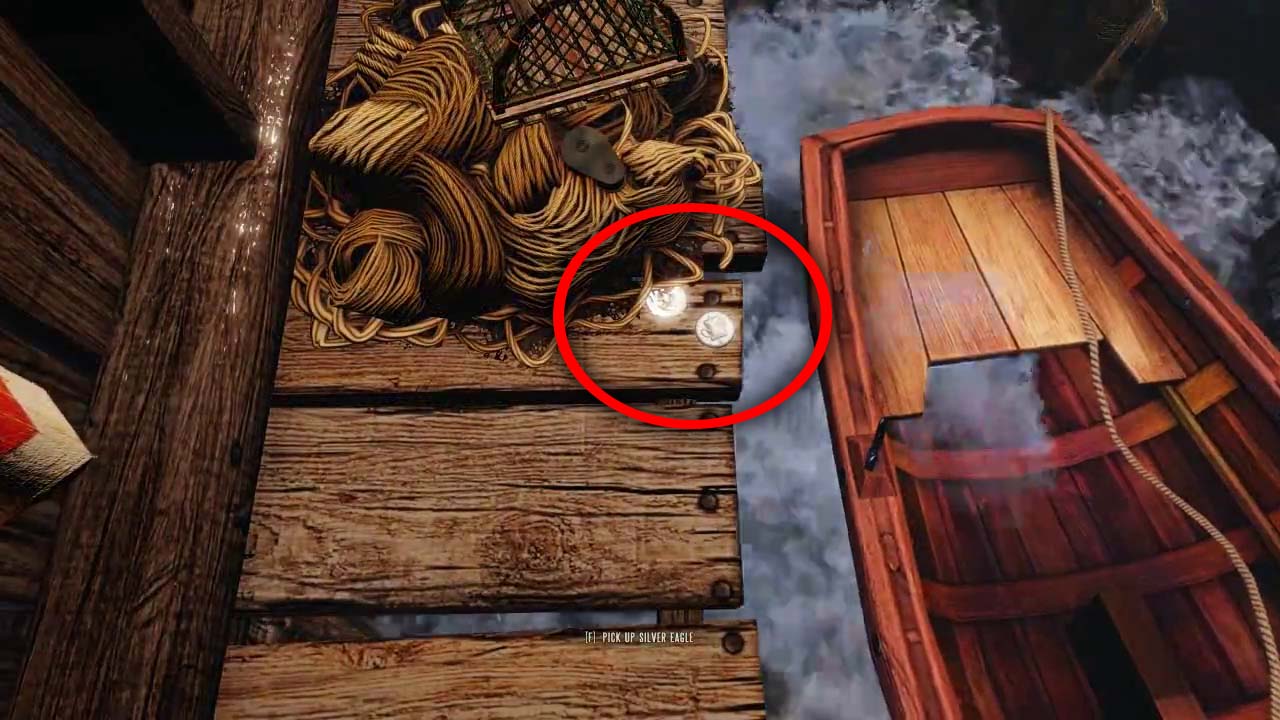 “Why are you doing this to me, game?” – I ask, because how can I believe that people are leaving money – and in a form of big shiny coins, no less – in places like that? “Why, game? Why do you keep reminding me you’re just a game?”

Of course, I collect the coins.

Then I approach the lighthouse. There is a note on the wall, and a prompt to knock on the door. I look to the left. It seems like there is a path around the lighthouse. I decide to see if maybe there are any coins waiting to be found.

“I beg you, game, please do not reward me for not doing the right thing and for doing the silly thing of playing the game instead of behaving like I am in a different world”.

But the game has no mercy. The coins smile at me. 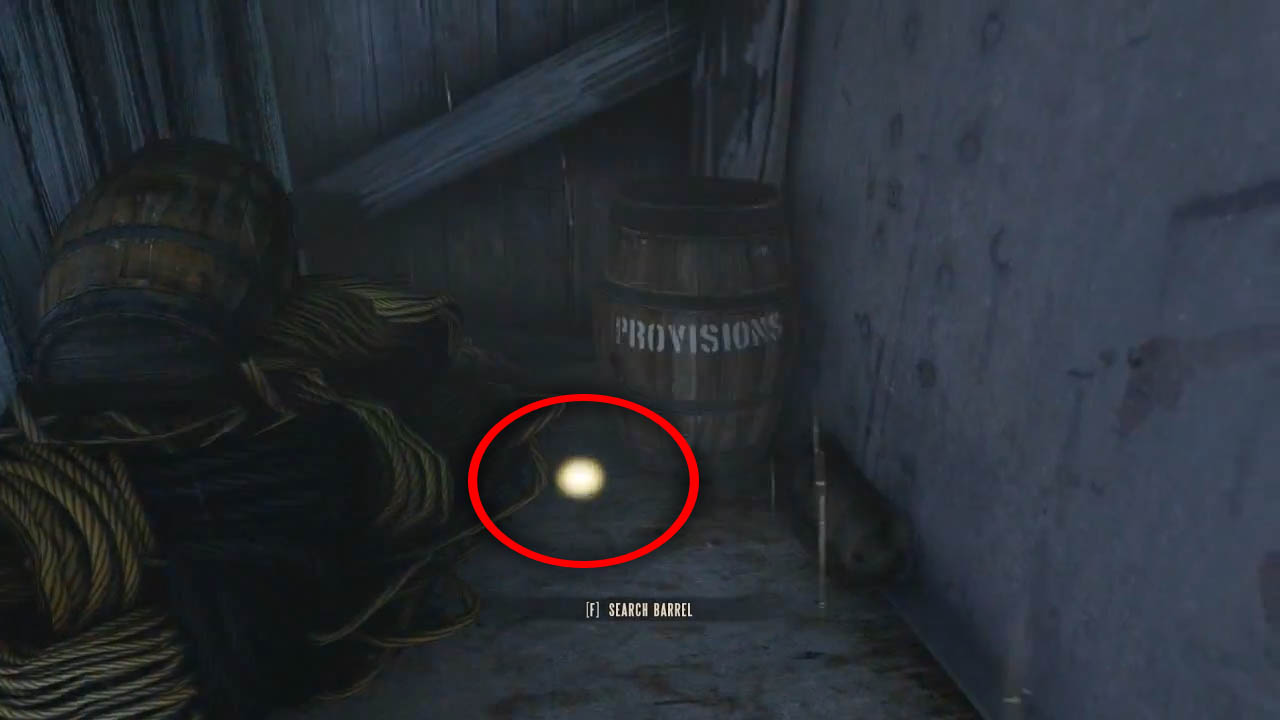 I feel doomed, because I know what it means. We all do. It means that from now on my gamer OCD will tell me to go left whenever it’s obvious I should go right. It means that instead of focusing on the experience, I will always be hugging walls and checking behind every corner. Because there will be shiny coins to find. Coins that are worthless, apparently, because they everywhere. Like at the end of a corridor, in a barrel. But if these coins are so worthless, why can I actually buy stuff with them?

The gamer OCD is a nasty thing. 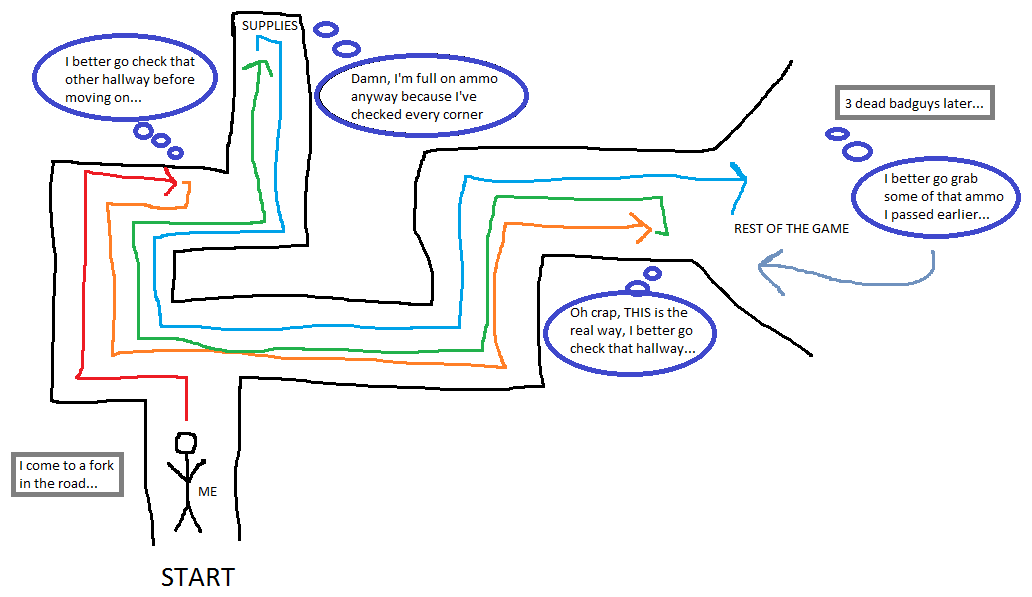 When I reach the second floor of the lighthouse, I am supposed to have a moment there. A moment of shock, I assume. A tortured man, apparently dead, is sitting in a chair. But my first thought is…

Because when you enter the room with the corpse, two big shiny coins are winking at you from the nearby table. The table right next to the corpse. 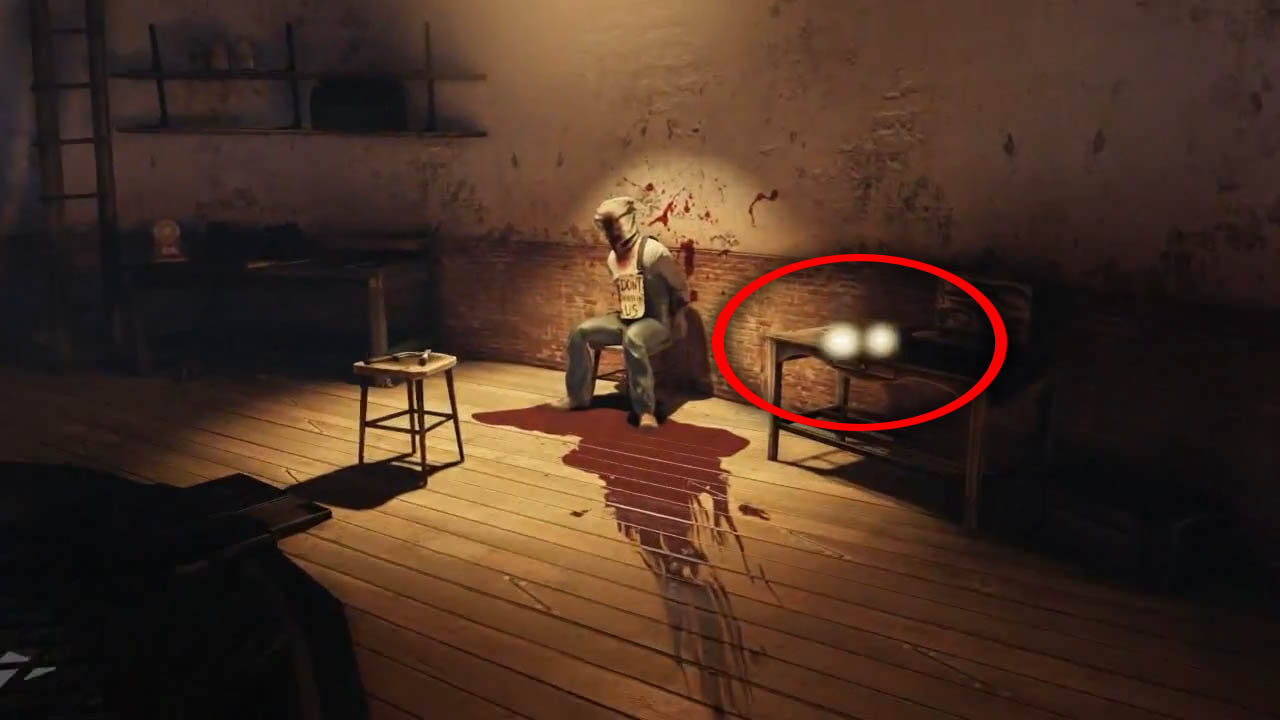 I have to assume that “Oooh shiny!” is not what the game wants me to feel at this moment. But I have no choice. The coins are not figuratively shiny. They actually are shiny. And they flash.

Then I notice a knife. 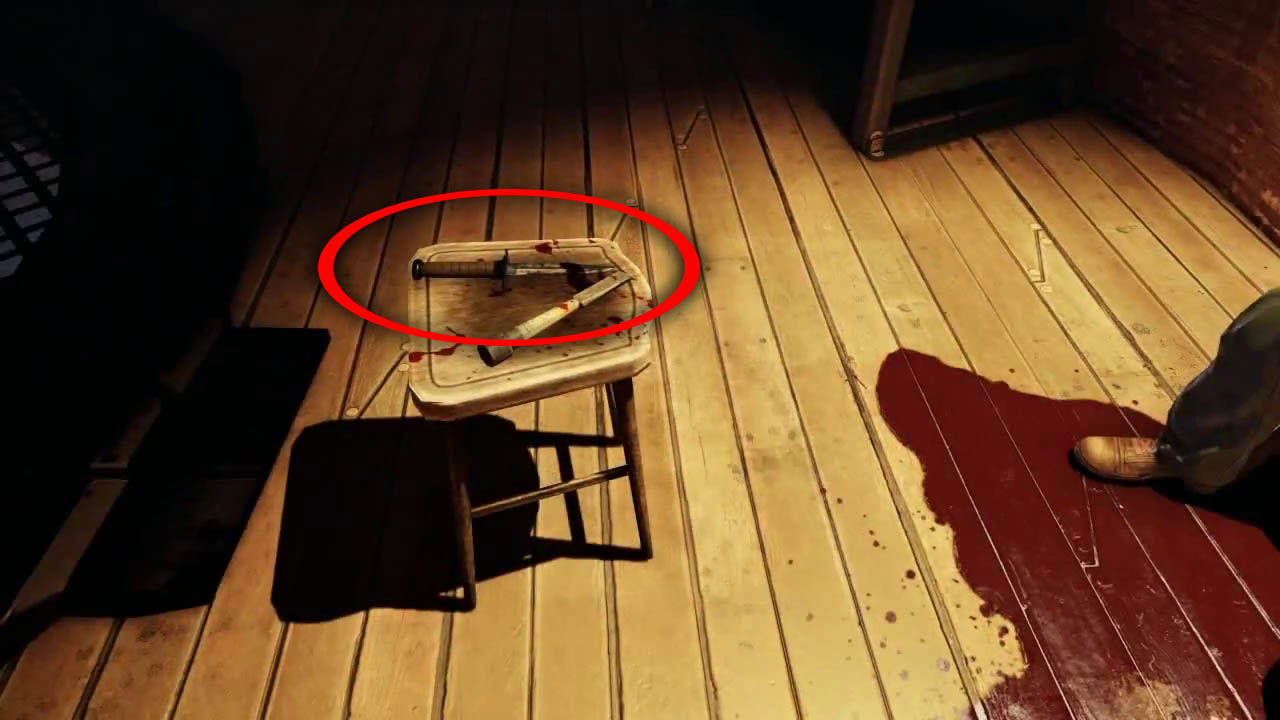 Now, the game allows you to interact with a lot of objects. You can, for example, try to use the phone or wash your hands. No gameplay benefits, just interaction and building atmosphere. Good stuff.

But can you pick up the knife? No.

Why? I don’t know. There’s no option to pick it up followed by “it’s covered in blood, I’m not touching it” or anything. There’s nothing, no action prompt, no interaction of any kind.

The knife is an item we’re used to being able to pick up and use in action games. But here it’s merely a decoration. It’s “dead”. It pretends to be there just for the flavor, but my gamer brain cannot accept it.

Seconds later, after a quite arbitrary puzzle – but let’s skip this part – I get blocked off in an area on the last floor of the lighthouse. Blocked off by this:

I assume I am playing as a grown up man. Normally, I would be able to get past this barrier without breaking a sweat. But I can’t. Even though when I jump, I can’t even see the barrier anymore.

And it’s exactly at this point – when the game reminds me for the seventh time that it’s just a game – that I have to quit and write this.

I am not angry at the game itself. Bioshock Infinite is not the first, and not the last game to be gamey. Hell, every single game I’ve done so far was gamey, and I am sure my next game will have some gamisms as well.

So what is it?

It’s the first Bioshock. Which has one of the best game opening of all time. Of. All. Time. Why?

It was cohesive, tight, focused, with no room for immersion loss. It was dramatic without being desperate, and it was glorious without being attention needy. It allowed me to slowly ease into this new dimension, escape the reality, and never look back. Even if, later in the game, I could actually bribe a safe.

But… Bioshock has tricked us all once, with its “Would you kindly?”. Is the same thing happening with Bioshock Infinite? Will I read this blog post in a few days and be ashamed, because I will have been fooled?

But, in a very weird way, I am happy that the opening of Bioshock Infinite did not allow me to immerse myself into the game’s world. I could never quite figure out why I loved the opening to the original game so much. But now I know.

For now, I’m returning to Columbia in hope that the game will finally let me forget that it’s a game. Because I don’t want to play the game about Columbia. I want to *be* there.