The Trouble with Immersion, or the Opening of Metro: Last Light

Metro: Last Light has just been released, and I’ve played the first five minutes. I have no idea if the game is great or not, but those five minutes ooze of production values, atmosphere, and are a promise of extraordinary things to come.

They also suffer from the lack of immersion, the exact opposite of what the game is trying to achieve. 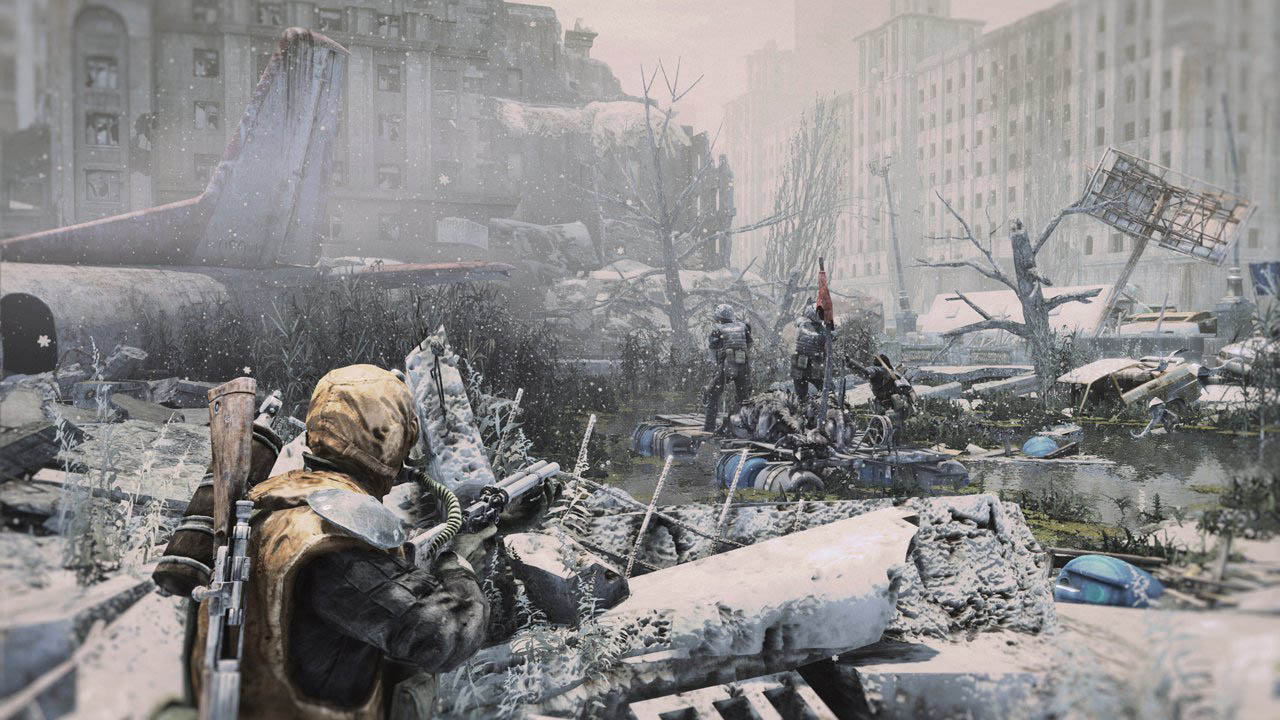 Let’s be clear about one thing here. I am using Metro just as an example. It’s just the latest game with this particular problem. There’s been a thousand more, and a thousand more will come. Heck, Metro is actually above most of them, as the developer does understand the issue and tried to deal with it, as I will show a bit later.

Side note: here is where I wanted to embed a YouTube video with the first 5-10 minutes of the game. However, even though I checked out about a dozen different versions, none would work. It’s astounding how people record these walkthroughs. It’s not that they rush through the game, it’s just that they are completely clueless, staring at random walls and floors, and missing all the interesting content. Even if they notice something entertaining, they just look at it for a second, tick off a mental checkbox and move on. Such behavior could probably be a subject of a whole new blog post. Anyway, for now let’s just use text and a couple of screengrabs.

Here is what happens (and don’t worry, this is not a part that can be considered spoiler-sensitive). A guy tells you to hurry up and see your commanding officer asap. You go to see the commanding officer. On the way, you can see a lot of people engaged in various activities: a soldier cleaning a weapon, a group of mercenaries discussing a rumor, etc. It’s all well done, interesting, and there’s a lot to learn about the world: both visually and through eavesdropping. 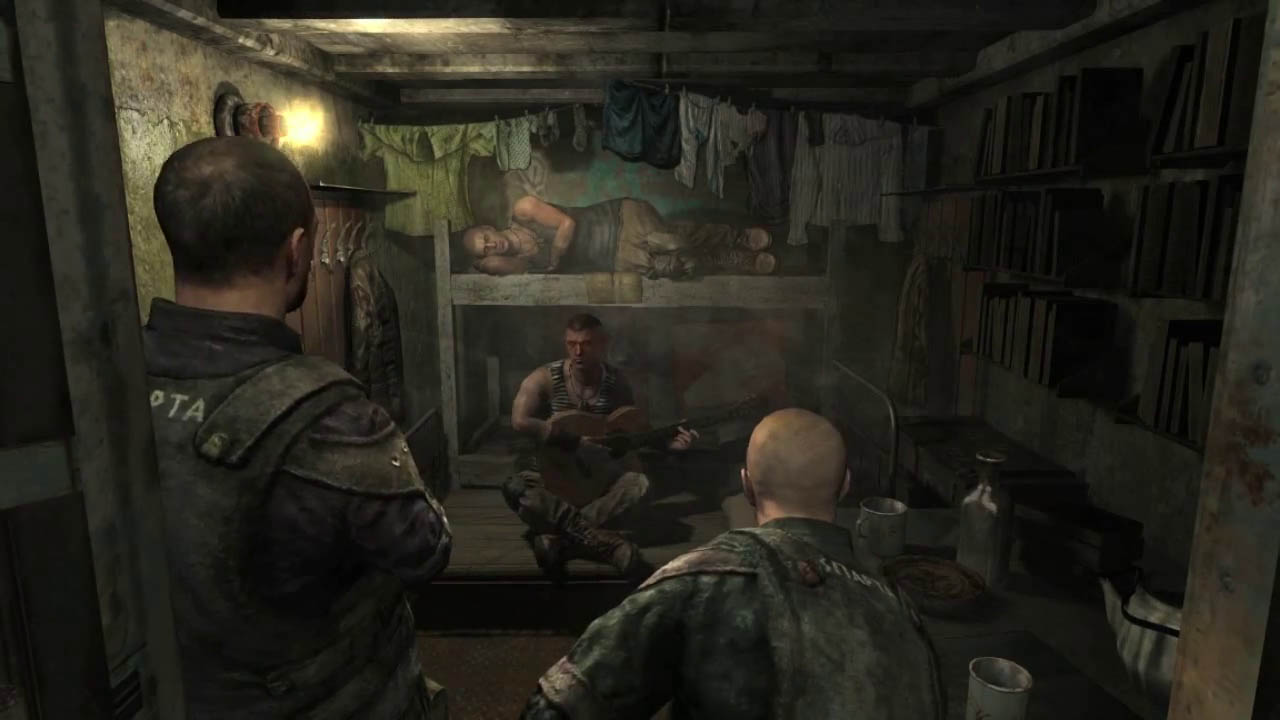 You may think that the problem I talk about is the conflict between the gameplay (mission: get to the commanding officer asap!) and the world (not stopping every ten meters to learn more about the world feels like missing vital parts of the story). It’s not.

Well, okay, it is indeed a problem – the soldier should have just told me: “Hey, your boss was here looking for you” and voila, problem solved, I know what to do, but I don’t feel the need to rush through the world anymore – but it’s not the issue I want to talk about today.

The problem is that the entire world does not feel like a real place. It feels like an animated diorama.

Humans are brilliant at reading patterns.

When we start playing a video game, its world and rules are alien to us. We do understand some of it (e.g. if it’s a game from a genre we know), but not everything. Those parts we don’t understand, we analyze. We poke around, try to interact with things, study the world.

So you begin Metro and look around. There is a guitar there, and an action icon appears. You press the button and “play” the guitar for a second. Okay, so that’s how this works. Then you leave the room, and you see two dudes talking to each other. You stop and listen, trying to see what happens. 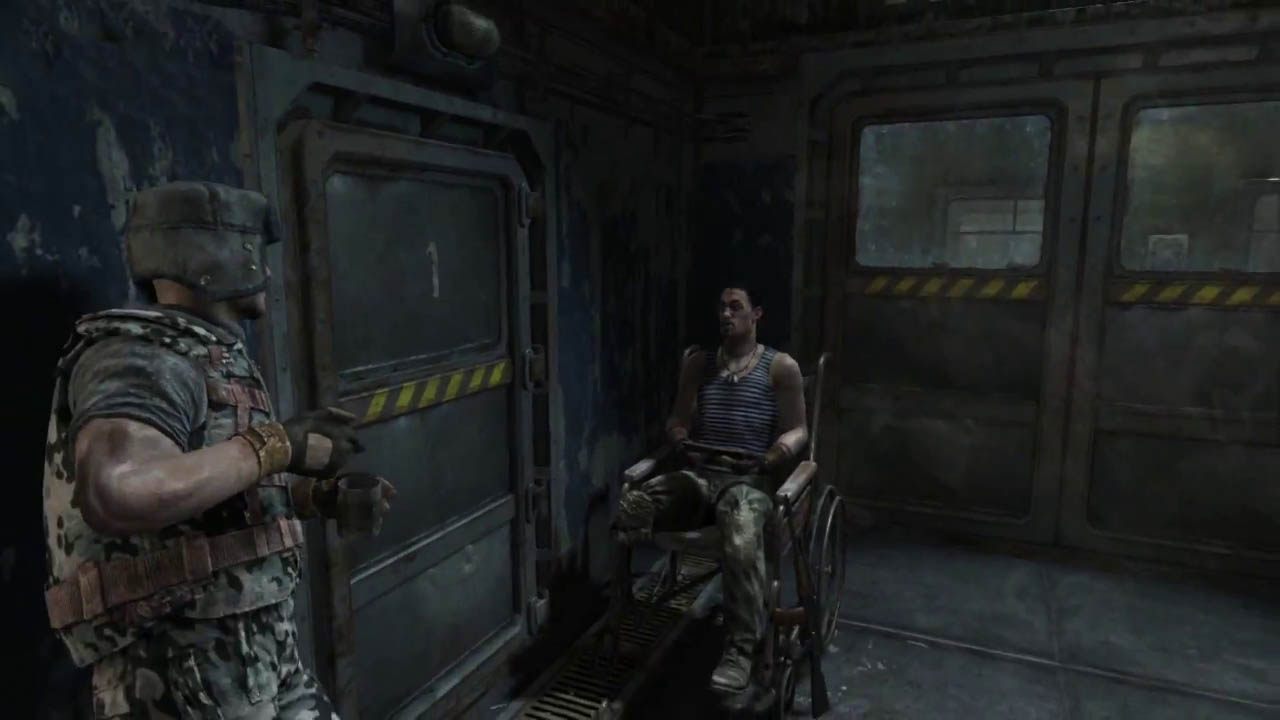 It’s supposed to be another immersive moment. But unless this is your first game ever, you know they won’t be talking forever.

When do you move away and continue your journey?

When the dudes stop talking and lose themselves in a never ending animation loop of looking at each other.

You’re done here, so you move on. In another place, a soldier is cleaning his gun. It’s a delightful animation, most likely motion captured, the soldier model looks fantastic. 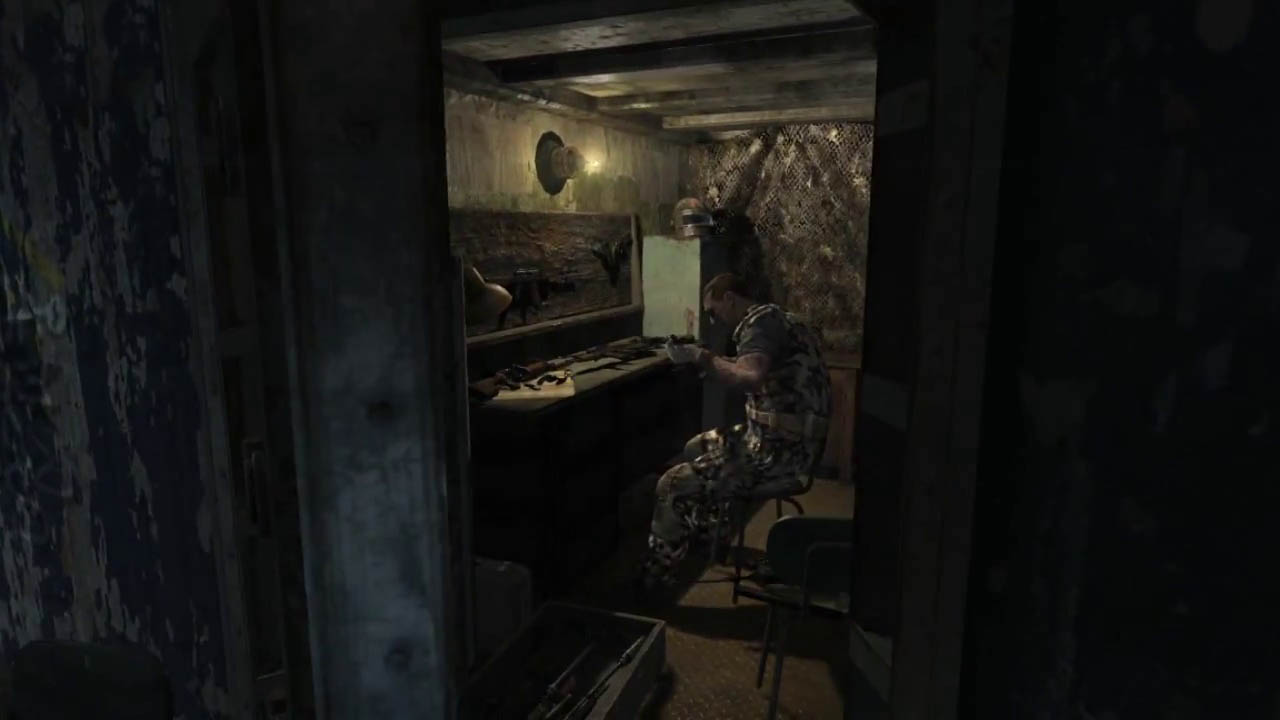 When do you stop watching?

When his animation loops, and he begins cleaning his gun from scratch, repeating the same steps as before.

And then it hits you.

These are not human beings, and this is not a virtual real world. This is a theme park ride full of mechanical creatures.

As I mentioned it before, the developer of Metro tried to fight that problem, and they took things to the next level. When you approach another group, they stop talking to each other and start talking to you. After that’s done, they pick up their conversation from where they left off.

But when they finish that conversation, they inevitably get silent and begin their never-ending loop of staring at the windows and sighing.

Take a look at this very short scene from Max Payne 3.

When I experienced this moment in the game, these were my thoughts:

“They did not want me to interact with them, so that’s why it all happens behind a fence”

“I wonder if they will go into an animation loop”

“Someone called the children, and they left the scene? Nice. It was a one-off. No loop!”

…but not even for a second I was in São Paulo, watching children playing soccer. I was merely observing a perfectly animated script.

Oops, sorry for ruining video games for you.

Seriously, though, is it just me? Is everyone else buying this, and I just see these things because I am a game designer and I analyze everything I play?

Honestly, I don’t think so. I’ve been reading stories about movie directors crying during the movies of other directors – and in theory they shouldn’t, right? Also, everybody knows darned well that a horror movie is just a movie and it’s all fake blood and silly noises – and yet we close our eyes and wet our diapers just the same. 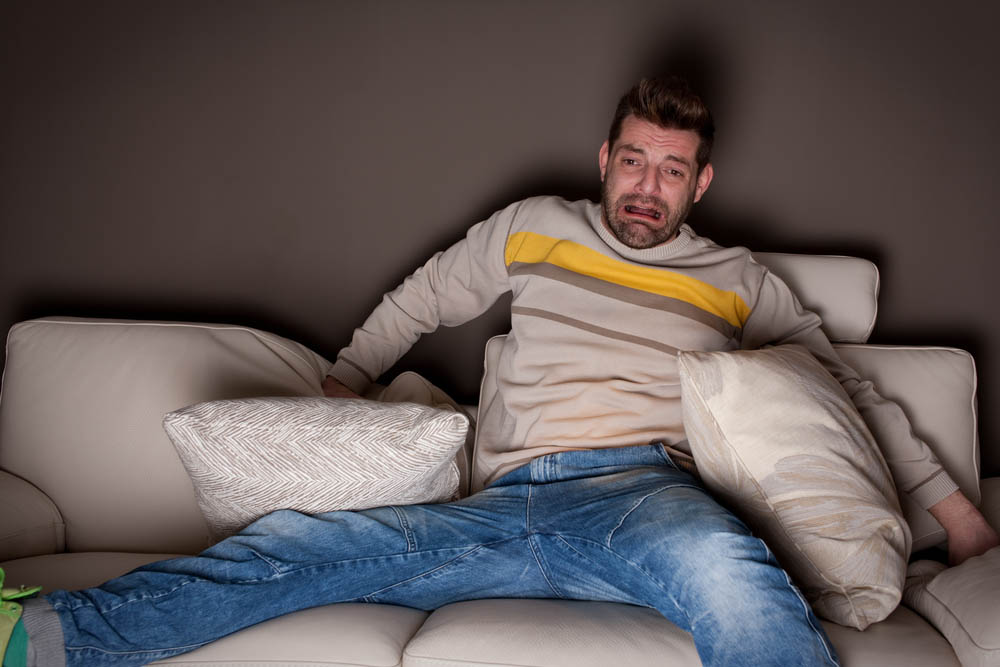 How to solve this problem? How to avoid the loss of immersion in situations like the ones mentioned above?

One method is through a lot of work that only the biggest studios will be able to afford. I mean, isn’t it silly that you can look armed soldiers in the eyes for eternity, and they are okay with it? Shouldn’t they be bothered? Shouldn’t they threaten you and kick your ass if you keep provoking them with your First Person Perspective stare?

Or just never allow the player to experience the animation loop. Imagine the same opening in Metro as it is now, but with two guards escorting you to the commanding officer. If you stop for too long, they get angrier and angrier, until they murder you and you learn a valuable lesson.

I could keep coming up with these scenarios, and it’s all doable, but that is a lot of AI and a lot of extra scripting and a story re-write and a lot of extra hard work in general. Actually, it’s even harder than anyone thinks because it’s not about securing the game from player’s poking and prodding. It’s making sure that the player never even thinks to test the game in such way. You don’t lose me when I see an animation repeating itself. You already lost me when I decided to check if the animation would repeat itself.

Is there another way, then? Easier, perhaps?

Remember that song? No? Never mind… Anyway, I’m talking about the contract between the players and the creators.

THE PLAYER: I agree to give it my best not to try to break the game or peek under its hood.

THE CREATOR: I will not tease and invite you to break the game or peek under its hood.

If you, the player, promise not to fire at the children playing soccer just to see what happens, we, the creators, will hide the end of their animation sequence by distracting you with enemies suddenly appearing and attacking from the some other direction. It will be absolutely normal that the children run away, and you won’t think twice about it anyway, busy killing people, and everyone is going to be very happy about the whole affair. Even the enemies, when they experience the glory of dying in slow motion.

If you encounter a soldier cleaning his gun, we promise that the soldier will turn to you and say “What, Artyom, never seen a gun before? Just fuck off, will you?” if you promise that right after his little outburst you will be on your merry way – just like you would if you were really there.

If you promise not to stare at a group of people to see when their animation loops, we will have them say to each other: “Hey, it’s that weirdo again. Let’s wait until he’s gone”, and if you promise not to challenge them with your piercing stare, then we will have them resume their talk just so you can eavesdrop on them, learn something cool, and leave when someone interrupts them and says they are needed elsewhere.

In other words, let’s meet halfway.

The contract. You signed it once already when you played with your toy soldiers as a kid, right? Why not do it again, as an adult? 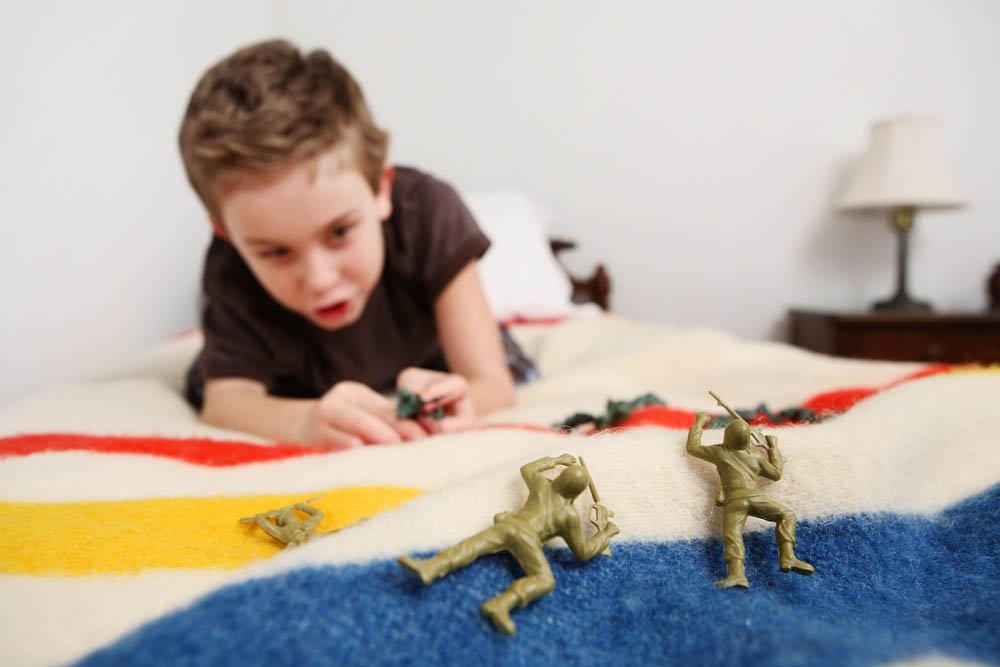 To be clear, I did not use the examples above to show how I would “fix” Metro or Max. I just used them because we just talked about them, and they are a good point of reference. And honestly, I don’t even know if these solutions would work in “the real world”, as designing on paper and seeing things in action are two different things. It’s just a general idea that we need to try a bit harder (although it does feel silly saying it when you know this), but you also might want to cut us some slack.

Meanwhile, the paradox is that the worlds of Metro and Max Payne and hundreds of other games are the most immersive, and we feel the strongest sense of presence when we are just exploring them without a friendly soul in sight. So far, even if they could be full of “enemies”, almost nothing beats barren wastelands, abandoned asylums, and forgotten ancient temples when it comes to immersion. Except interactive dramas and some open world games, but they are a whole different story.

Immersion is a bitch, and for now we cannot kick its ass without your help.