It’s a simple teaser video… Or is it? Here are five things you (probably) did not know about the teaser for The Vanishing of Ethan Carter.

We want our game to feature certain poetry and pictorialness to it, so we looked at a lot of famous paintings of the past to see if anything can be an inspiration for our teaser image. And it could, with “”Hunter Sleeping on a Hillside” by a Herman Saftleven, a 17th century Dutch painter. 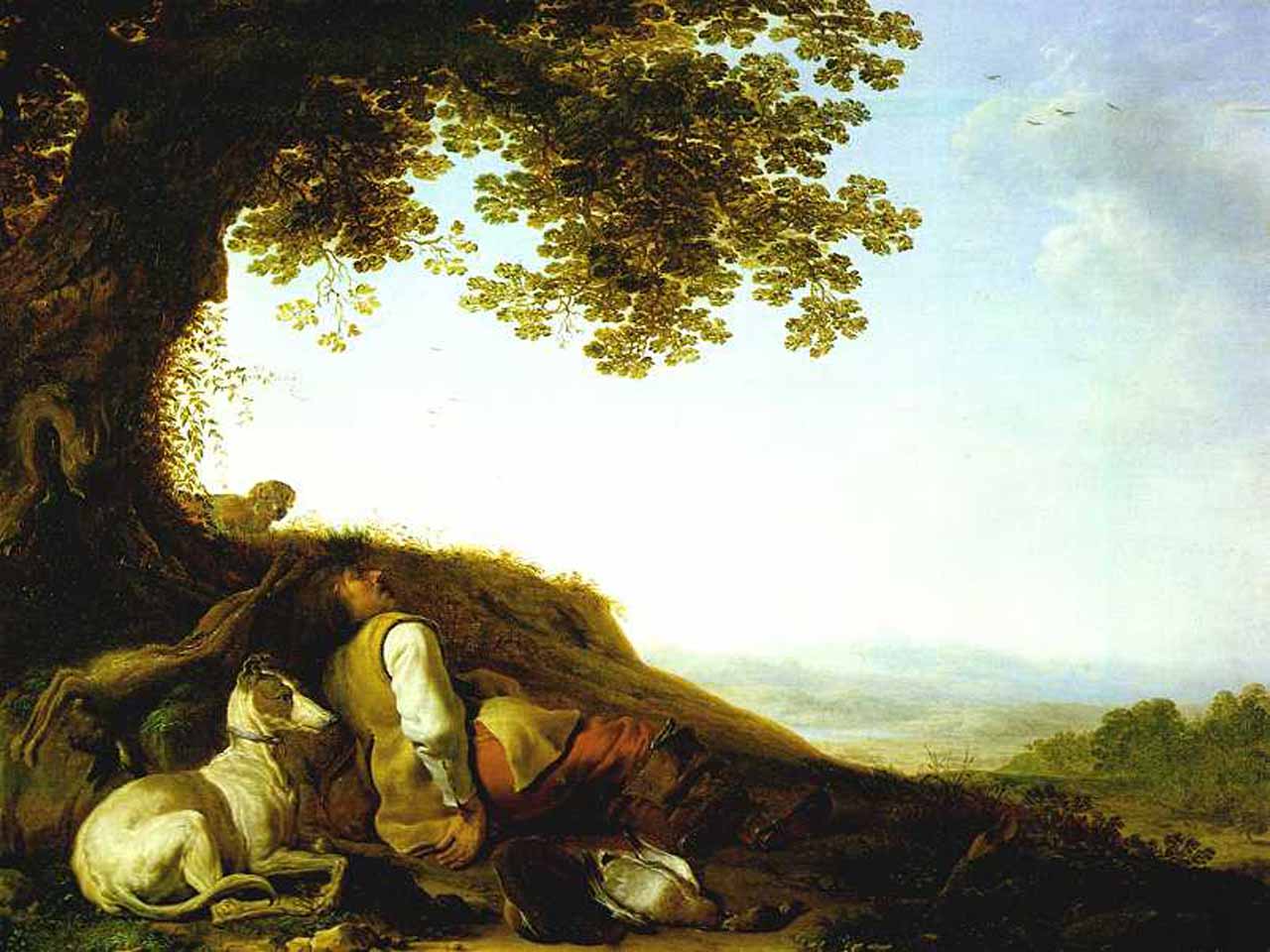 We loved many things about it. The unique composition. The closeness of peace (sleeping hunter and his dogs) and death (dead animals). And, most of all, the mystery of what’s behind the hill. The imagination runs wild. Is it a small town? A dangerous river? Heaven? Hell?

We asked our concept artist to use the painting’s composition frame for our own message. Here’s what we got: 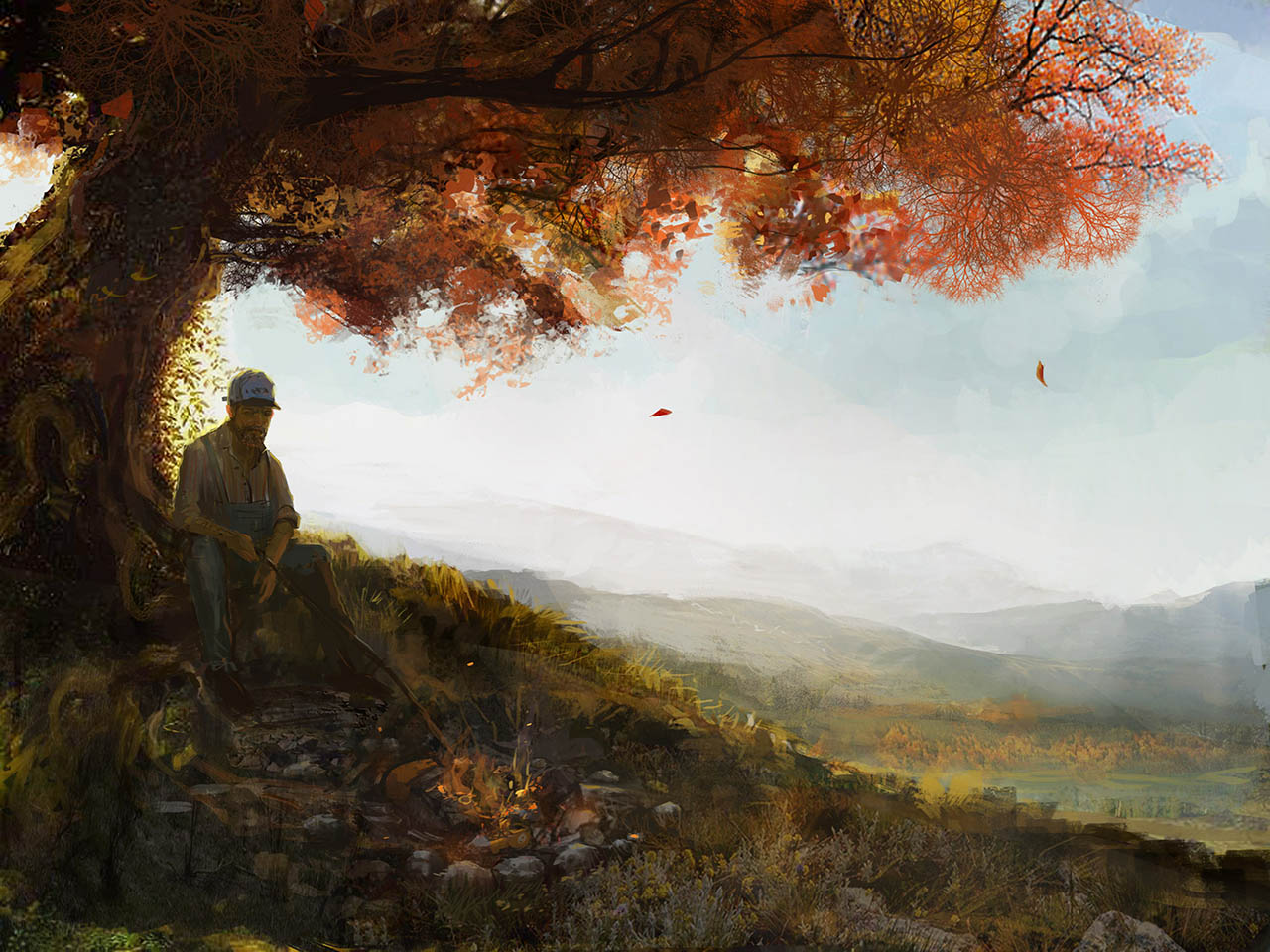 We loved it, and we started to work on the teaser image. Here is a very work-in-progress version, don’t mind the roughness of it and its placeholder assets. Especially the old man’s scary face. 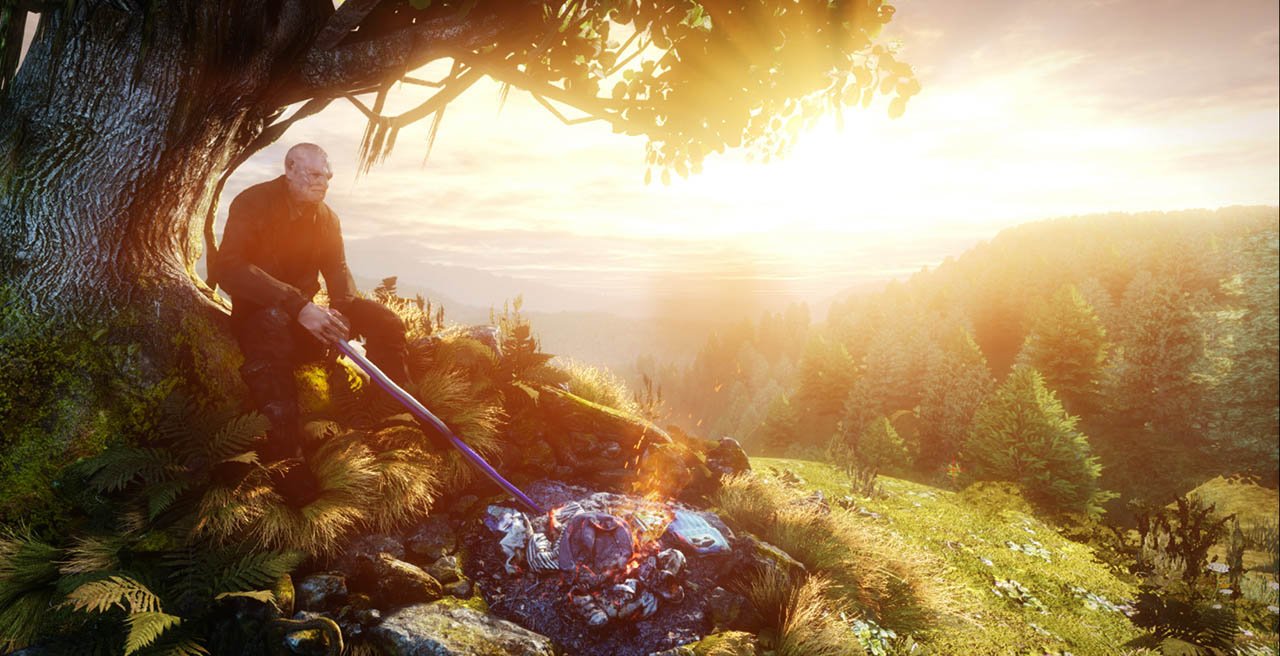 And this is where we have noticed a problem. The composition just didn’t work for what we wanted to “sell” with the image. You just can’t really see what’s in the fire. And it was important to us that you see it.

We had to find another composition. And we did, as you can see in the final result below. Also, the whole “can they see it?” problem made us go beyond the image itself, and actually create a teaser video. 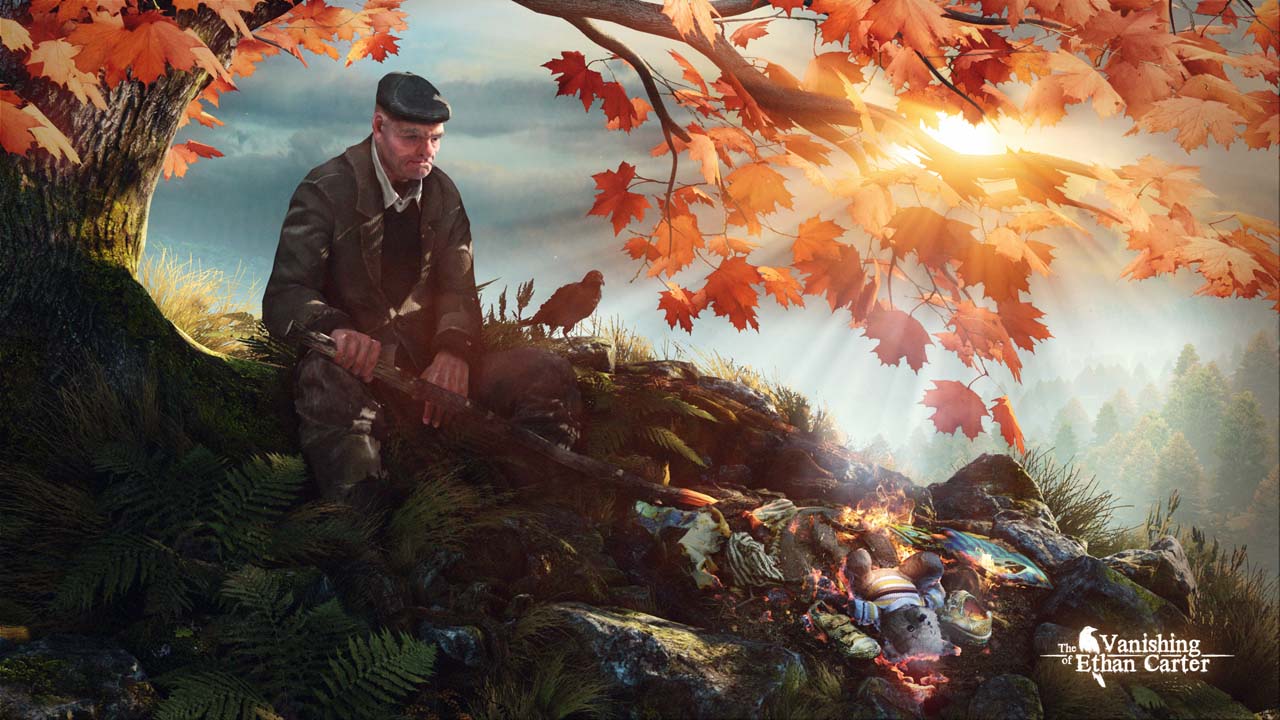 We were testing various tracks to see what kind of music works best for the teaser. One of these tracks was from Arkadiusz Reikowski, a music composer who worked on games like Afterfall, Necrovision or Two Worlds 2. The piece is called “Into the Rain”, and is from his album called “Inner Silence”.

The track is over 2 minutes long, while the in-engine part of our teaser is a little over 20 seconds. We looped the video while listening to the track. To our surprise, almost any random fragment of the track worked beautifully.

We contacted Arkadiusz and asked for permission to use the track. Not only he agreed, but he actually made a few custom versions for the trailer!

After we have done the teaser scene in Unreal Engine, it felt very real. We felt that it looked more like a gameplay footage than a question. So we have slowed the world by 30% (Unreal Engine users will know this as a console command: “slomo 0.7”), and this gave the dream-like vibe to the scene.

And by “we” we mean Michal. He showed the scene to the rest of the team without telling us what has changed, and we just loved the new version. It’s only after he told us his trick that we were able to notice the difference. 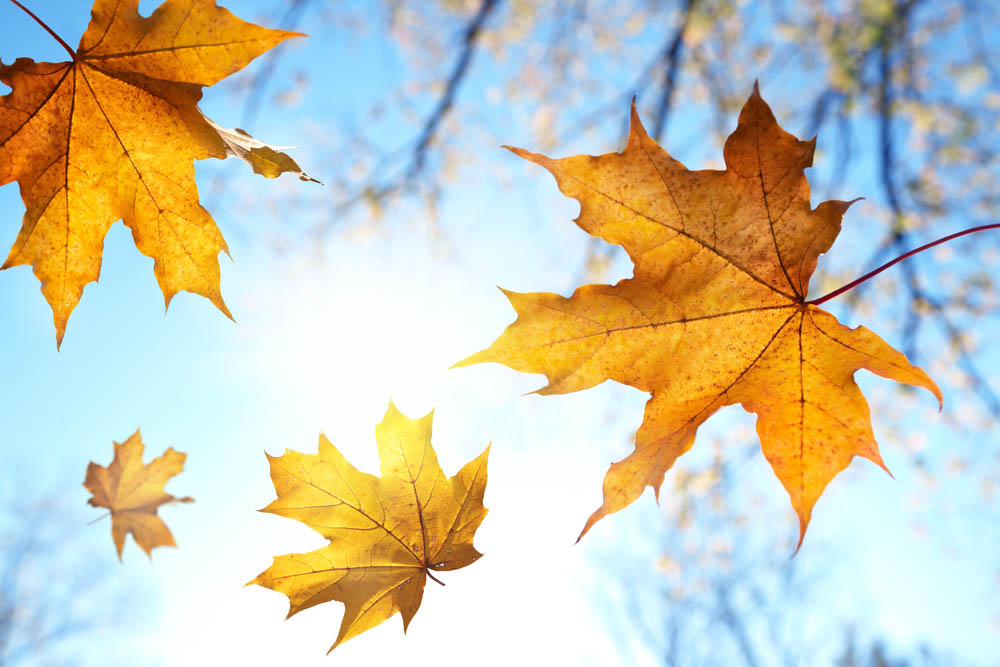 Not many people noticed the raven. Did you? 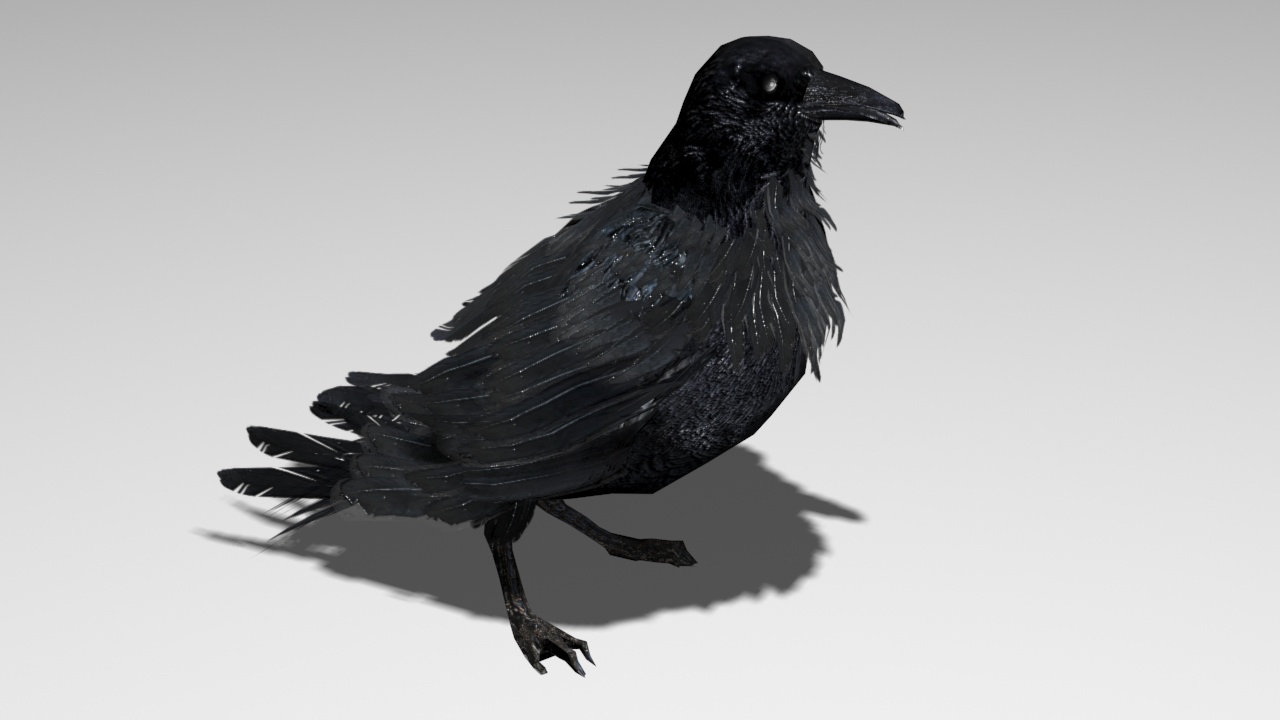 We know. But it’s vital it’s a crow, not a raven. It’ll become clear once you play the game. Click here for a “raven vs crow” google search to see the difference between one and the other.

5. THE STUFF IN THE FIRE

The two most important objects are quite easy to spot, and that was the point, but here’s a full list, detective. Click on the image to see the larger version: 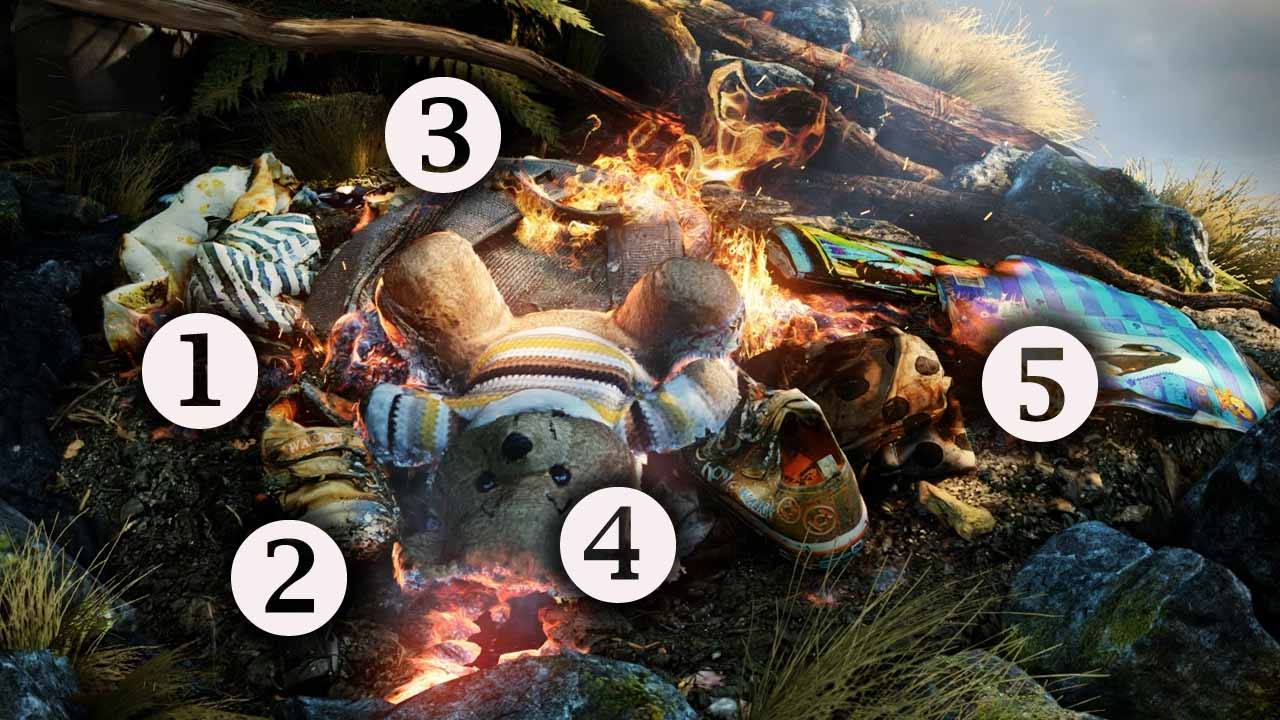 1. Stripe t-shirt
2. Sneaker (the other one is on the other side of the teddy bear)
3. Black backpack
4. Teddy bear
5. Notebook with striped cover

Are there any more things you might have missed?

Yes. We have not revealed the biggest secret of the video yet. And we don’t mean the story or the metaphor that’s behind the teaser. But let’s leave the details for the future, when we reveal everything on this very blog.