The horror, the horror...

Our last post was about a certain scary painting, the interpretation of which was left to your imagination. Our friends from various Polish game development studios played along and delivered seriously disturbing and funny renditions. Are you ready?

Oh, the translation was done by Adrian, that poor non-native soul. So go easy on him, will you? Here’s the original image by our concept artist, Bernard Kowalczuk, just for reference: 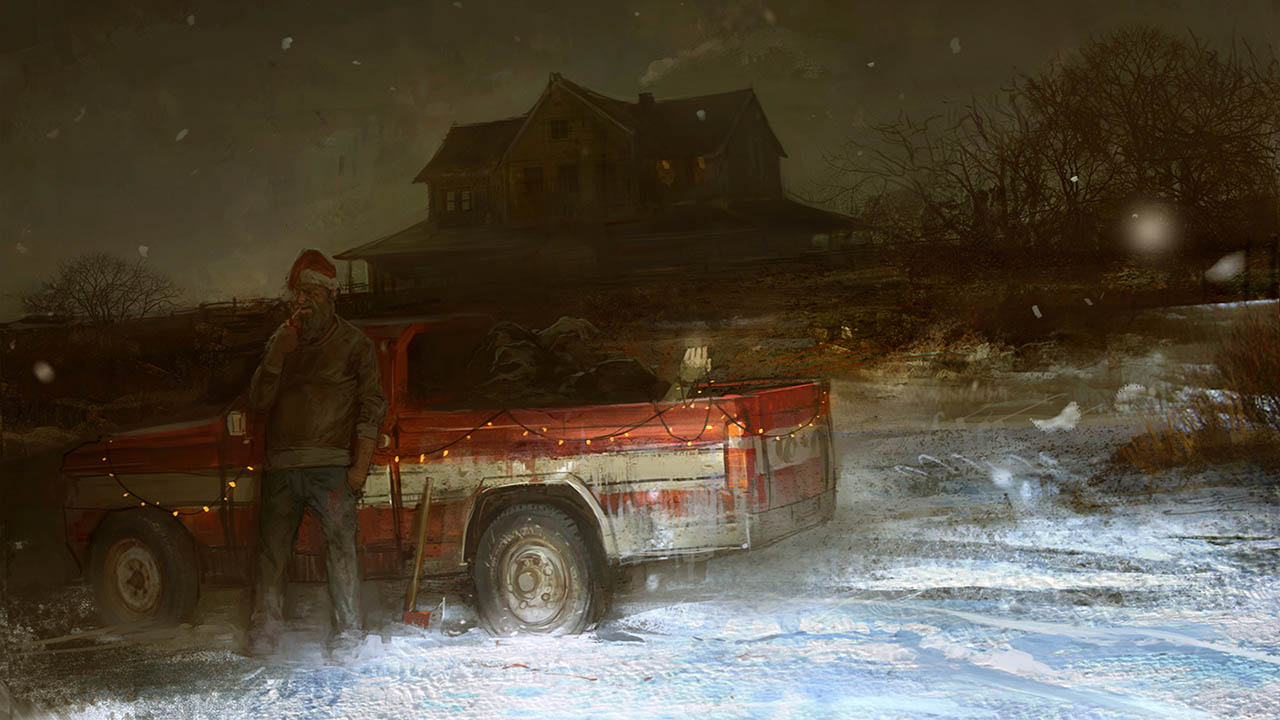 Jarek Ciupinski, the programmer at People Can Fly had a few great ideas. The first one involved a potential sequel to a certain cowboy movie…

Three lumberjacks realize that there’s more to their friendship than just drinking and cutting down trees together. The image captures the moment when one of them left the party to grab a smoke, while the other two carry on cuddling under the blanket (because it’s cold).

…and the second one had a great, puzzling finale:

The man is a serial killer. Retired. Alcoholic. Also retired. He hasn’t killed for twenty years. It’s his car. But not his work. When he came back home, the smoke from the chimney was the first thing he had noticed. Then the car with the holiday lights. Then a familiar watch on the hand sticking out of the pickup.

Now the man wonders whether the axe is an invitation, or a warning.

Tomasz Namielski, Senior Promo Artist at Rocksteady (okay, the studio is not quite Polish – but he is :) had a different idea:

Why so serious? It’s obvious the man just came back from the Christmas shopping spree: the hand belongs to a mannequin Santa.

A rich man – head of the family – came back from a hunt. He’s now resting before he skins the victims. He has to skin them, because a wallet able to hold $4000 can only be made out of the human skin. 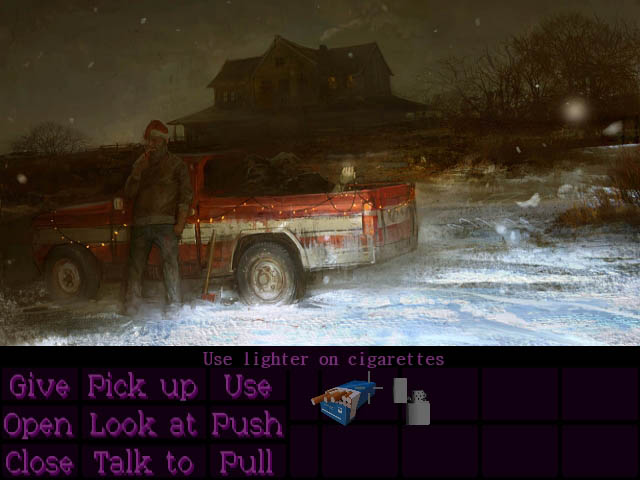 Marcin Blacha, designer and writer at CD Projekt RED, showed off his love for a moody story-telling.

Santa Claus drew heavily on his cigarette, then spat on the ground. He took one more look at the sign. Babbin, AL, 247. He remembered the number from the last year: 397 before he came to town, and 376 when he left it. This included the dead tourists, but there were less and less of these each year.

The plan from the last Christmas now seemed a little silly: so what that he gave semi-automatic weapons to the elves? Fucking rednecks were the masters of traps, and they’ve been preparing to hunt down Santa since autumn.

Santa lost weight, drank a little too much and did a lot of thinking this last year. Around October he had realized that there truly was no other option. The kids all around the world need him, right? The haggard reflection in the mirror agreed and emptied another glass.

The plan worked, and Santa had to break only one rule: he came to Babbin before the holidays. He took an old pick-up truck instead of the sleds. He wanted to leave the hat behind, but the reflection disapproved. No, for fuck’s sake, this year Christmas in Babbin will happen on my terms – he said out loud.

When he reached the destination, everyone was already asleep. As usually, he got in through the chimney. He found the cellar keys quickly; the snoring mutant kept them on his belly. Taking them out quietly was another thing, though. The keys jingled softly when he was looking for the right one.

He imagined her differently. He could not believe that someone so weak and chained to the wall could write such pretty, such round letters. He wanted to be sure, so he asked if she was nice the entire year. She was.

Santa put out the cigarette and took another sip from the flask. This Christmas he won’t visit Babbin. Yeah… No reason whatsoever.

Wojtek Pazdur, the producer and designer at The Farm 51, brought us one of the funniest interpretations. However, this is something that only works if you’ve seen the infamous “Christmas in Radom” movie, and we doubt anyone outside Poland has seen it. So this is something just for for our Polish fans (except for the joke in the top left corner of the image…). Wojtek said that “luckily, modern games feature hint systems for the noobs, and thus the secret is revealed“: 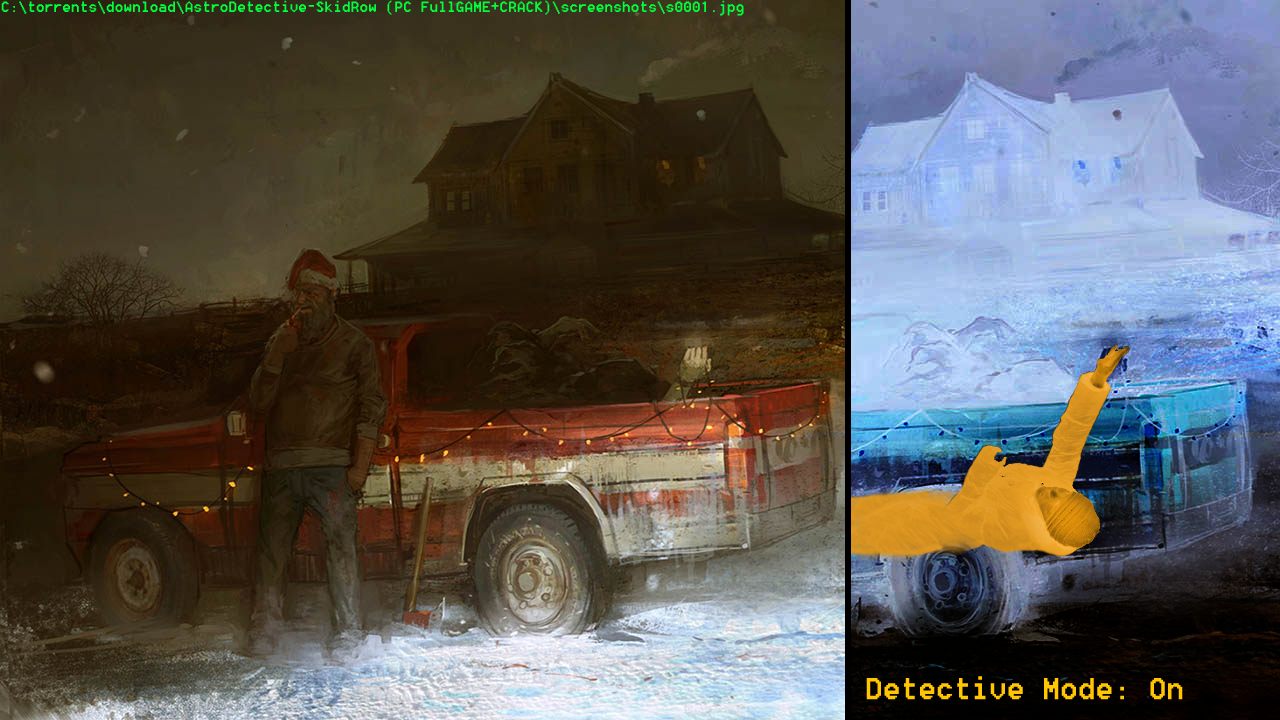 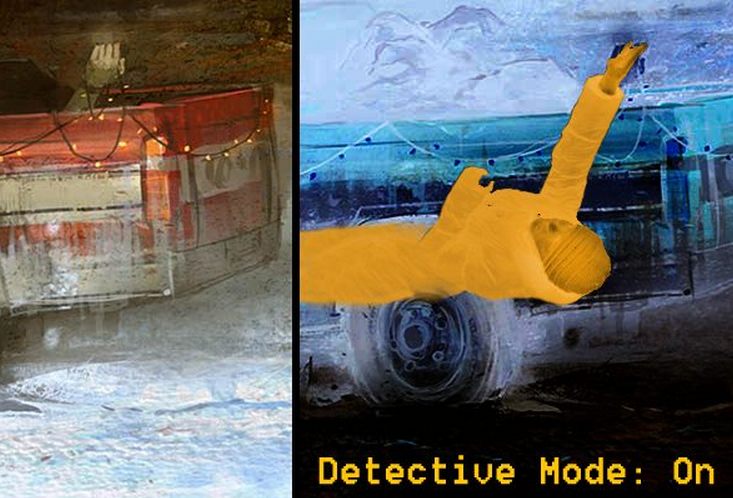 We did our own versions too, why not? Adrian Chmielarz, our resident Game Designer, had this:

Poor family, father with three children, they live in an old house on the edge of everything. As we can see, the lights are still on, the children are waiting for Santa. The father went out to beg on the streets for the money for Christmas presents, but he was not lucky, not lucky at all, surrounded by people always in a hurry, ignoring the loser beggar. He could not get any help even from a shopping mall Santa.

Now the shopping mall Santa rests in pieces. The father goes back home, but he smokes a cigarette before he enters the house, wondering how to get the bags inside without being noticed. There will be no presents, but at least no one will be hungry this joyous Christmas time.

Finally, Adam Bryla, our 3D Graphic Artist, did his own spin on the flesh eaters, and contemplated the benefits of the northern hemisphere…

A lonely cannibal came back from the hunt. Now, fully prepared for the Christmas dinner, he can finally grab a smoke. He’s lucky he lives in the northern regions of the world, where the winter makes it easy to live without a freezer.

The stories above are just the tip of the iceberg, but the rest of that iceberg will never see the light of day. It’s kind of …NSFL :) So if you’re looking for more, you will have to use your own imagination. You naughty, naughty people. Have fun!