Ten Indie Games That Will Make You Feel Things

During the research phase of our first game, I’ve stumbled upon dozens of amazing indie games that ignited my imagination. They made me think, and they made me feel. They made me want to talk about them to whoever listens. And what better way than a public blog?

Two months ago I knew nothing about most of these games, and I’ve only discovered them with my google-fu. As for you, you may have heard about them or even played them long before me. It doesn’t matter. What matters is that we both enjoy them, keep them in our hearts and minds, and tell out friends about them.

Here is the list of Ten Indie Games That Will Make You Feel Things, in alphabetical order. Click on a game title for more info.

THE CALL OF THE FIREFLIES

If you like beautiful things, this one’s for you. No social commentary. No insight into your psyche. Just the beauty of fireflies glowing in the full winter moon.

No weird shit, and the puzzles almost make sense. It’s the Myst done right. I love returning to this game just to immerse myself in it for one more minute.

It requires some effort on your part: it’s a mod for Crysis, not a stand-alone game. Honestly, I think it’s worth buying Crysis just to be able to launch this mod. Otherwise, look what you’d be missing out on.

Pro-tip: if your screen gets blurry after the first river: save, quit, launch, load, and you’ll be fine from now on until the very end.

EVERY DAY THE SAME DREAM

A fellow game developer recommended it to me. At first I thought he was trolling. “A short existential game about alienation and refusal of labor” does not really make my spider-sense tingle. But in the end I was ecstatic I gave it a chance.

The game is not as self-conscious as the incredible Stanley Parable or the quirky Burn the Rope, but it still requires you to think outside of what all these years of gaming conditioned you to think. The ending is brilliant, but the steps towards it are even better.

Playing against the game is playing the game.

Go for it. You’ll see what I mean. It launches in your browser. It’s free. It’s ten minutes long. It will change the way you think about games.

The title suggests that the game is a turned-based strategy about politics.

The best thing about the game is that there’s always a surprise around the corner. It’s a truly impressive piece of work, especially considering it was made in under seven days. When I told this to my gamedev friends, a slow clap was in order.

This little gem was my first contact with a notgame ever, long before we’ve launched The Astronauts. It’s ultra short, yet still manages to punch you in the gut and piss on your ashes. I swear, sometimes I think the game’s impact on a person is inversely proportional to the game’s length.

It’s been two years or so since I played this game, and yet I still remember every second of it.

Would the game be as effective without such extremely minimalistic, symbolic visuals? Something to think about.

Remember how some people cried that Dear Esther was a waste of money? Boy, would they be in for a shock if they paid five bucks for The Graveyard. It’s a game about an old lady who walks through a cemetery to sit on a bench.

If you light your cigarettes with hundred dollar bills, go and buy The Graveyard. It’s best experienced with no knowledge of what happens. Stop. Reading. Now.

No? Okay then. They have a free demo, too. The only difference between the demo and the full game is that the grandma cannot die in the demo. Yes, that’s all. And it’s all the difference in the world.

I paid for the game without looking and after playing it I could not believe those few minutes were all there was to it. And yet, the game stuck with me. Two months later, I still think about it now and then.

But don’t listen to me. Listen to this guy, and gasp at how an incredibly short notgame can influence a man more than dozens of hours of “proper” gameplay.

I know a game developer whose mantra is: “less is more”. For a long time I considered it a silly hippie talk. But Hollow Moon is a perfect example that the man is right.

You go with this and the result is an incredibly immersive experience. In this particular case, experience of being alone in a moon base.

I know you will not play it. It’s a mod for UT2004. I doubt you have it. But if you do, treat yourself. Also, ping me when you manage to exit the base. I couldn’t figure it out.

You are an alien. You crash on Earth. That’s all I can tell you.

Look, a lot of these games are about exploration and discovery. And there’s no discovery if you already know what’s behind door number three. If this were 1999, you wouldn’t want me to tell you that a well written script of “Sixth Sense” cleverly hides the fact that the hero is actually dead, would you?

Not that ImmorTall is a game with a twist. It’s not. Still, this emotional rollercoaster is better experienced without any spoilers. Fingers crossed that “alien” and “crash” are enough to lure you in. It worked on me and the game delivered.

There were onions. Those damn onions.

Don’t worry about the “2” part. Part 1 is included with the mod, remade as the prologue.

What is an action-exploration horror doing here, among all these other artsy-fartsy games?

So imaginative, in fact, that it puts most AAA action horrors to shame (not you, Dead Space – we good). It would be impressive if this were a big production, but to learn this is a fan-made mod? Mind blowing.

The mod requires Half Life 2: Episode 2, but you wouldn’t call yourself a gamer if you didn’t have it, right? Grab the game, play it in the dark, headphones on. If you care about your furniture, diapers come highly recommended.

For a long time I wanted to make a game that you can only play once. But when you are a game designer you quickly learn that if you have a fresh, original idea, then someone else has already made a game around it.

Such is the case with One Chance. The world is about to end, and you only have one chance.

One chance to do what?

I never replay games that are about choices, like Heavy Rain or The Walking Dead. Correcting your choices and changing the consequences is like playing chess with yourself: you win and lose at the same time.

I recommend you approach One Chance with the same state of mind.

I am not a patient man. After five minutes with Dear Esther, I wanted to uninstall it twice.

Proteus is not fun if you are in a rush. It shines when you give it a bit of love and attention. It’s a notgame about you exploring an alien world. It’s not perfect, and the cardboard pixels are a bit tired. But when the magic happens, the air begins to smell like oranges and happiness.

If you have a kid, that’s an excellent excuse to justify the purchase to your significant other. Then put the kid to sleep, take the gamepad in your hands and explore. Wander. Wonder.

If you liked the list – and, more importantly, these games – feel free to share it with your friends. If you’re still hungry, google for more. For example, that’s how I found this, this and this. If you think I missed something noteworthy, let me know on Twitter – and I’ll be more than happy to try it and eventually update the list. 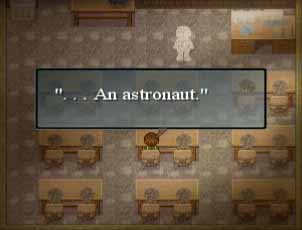 PS. By mentioning To the Moon, a redditor made me realize I was not clear that the list was about smaller, less known titles. Otherwise this post would have been exclusively about To the Moon, which I consider one of the best, if not THE best game of 2012. It’s a game that had a profound impact on both my personal and professional life. It’s also a game in which one of the characters gives a very nice answer to the question: “Who do you want to be when you grow up?”. Just look to the left.