Astrolife #1: We look ridiculous in 3D

If you were ever curious what’s happening at a game developer behind the scenes, well, a lot has been written on the subject already. But here is our own take on it, in our own voice. Hilarity ensues. Just look at those 3D glasses. 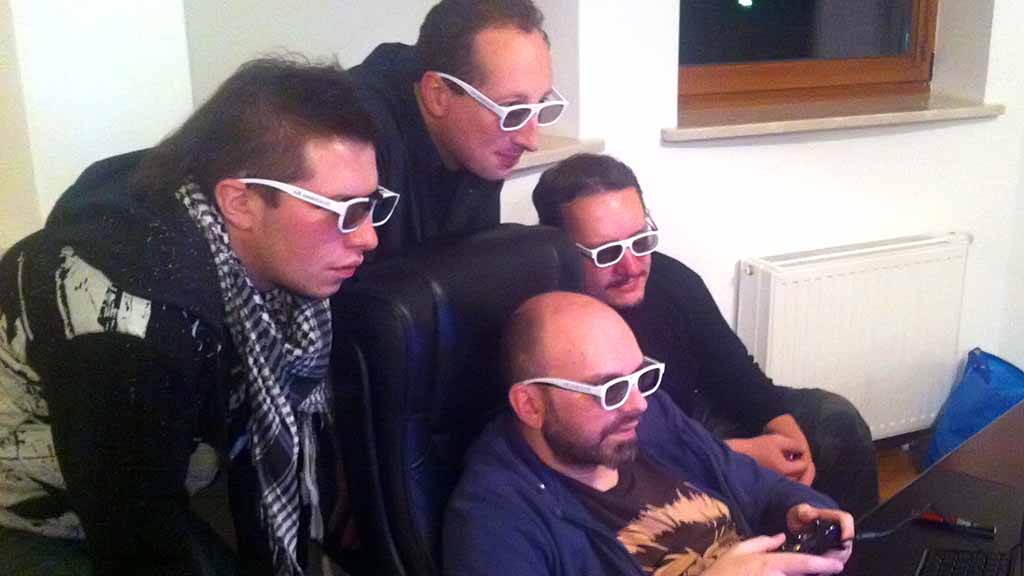 Adrian is supposed to be designing the game, and instead for the last two weeks he keeps playing a game in which he fights the six Demons of Hell known as HTML, PHP, SQL, CSS, JS and Saphathorael (okay, the last one is from Painkiller HD remake). He’s near the end and cannot wait for the end boss, known as GoDaddy. That shouldn’t take long, as GoDaddy is a weak creature and should be dealt with in a matter of hours. In other words, as soon as we’re done with the website look and feel, we will migrate the site to a better hosting service.

Luckily, the rest of The Astronauts crew is doing some real work. Assets are being created, and the code is being coded. And that is immensely impressive considering there is no design yet! Okay, fine, that’s an exaggeration, it just does not exist in a written form yet. But we do know what is the game we are making.

We had a discussion the other day about when we could reveal the game to the public. We all agreed we wanted to do it this year. We actually agreed on something a bit more aggressive, but it’s a secret. We don’t want to make fools of ourselves when a delay happens. We know that delays are extremely rare in this industry, but better safe than sorry. And yes, we know the delays are actually very common in this industry, we are just Astrolling. (Dude, seriously… – Andrew).

WE WILL SUPPORT 3D

We want to properly support 3D in our game, so we were checking out some games that do it right. The best one, hands down, is Trine 2. We were stunned. The game should have a subtitle: 3D Done Right. If you need a killer app so you can rub your new 3D monitor or TV in your friends’ faces then nothing else comes even close. And it’s an enjoyable game, too. They have just released a DLC (or an add-on, whatever) which is even more impressive, if that’s even possible.

A Graphic Artist Who Wishes to Remain Anonymous brought it to our attention that our logo had some “kerning problems”, “too much light” or “not enough light” in some spaces, and that something-something Pantone. We told him that if he is so smart, he should fix the logo himself. Which he did. And for that we are truly, deeply thankful, Graphic Artist Who Wishes to Remain Anonymous.

Here is the logo “before” (narrow T) and “after” (wide T). It’s not the final version, but it’s the image the Graphic Artist Who Wishes to Remain Anonymous showed us to make a point. You can see the final version at the top of our website. We will update the logo on Facebook soon as well.

And that’s a short recap of what happened these last few days. Let us know on Facebook or Twitter if you think Astrolife is a good idea.